Skill up and save 15% this week only using code CYBERWEEK22 at checkout. Explore training
Home / Resources / Blog / Do You Have What It Takes to Lead a Successful Change Effort?

Do You Have What It Takes to Lead a Successful Change Effort?

Here’s the scene: You’re leading a change. You’re motivated. You’re energized. You have a good idea (or someone else does) and you can see it will result in great things. Now you’re trying to get other people to make it happen. It’s time to communicate!

Ah, but your idea requires people to get over that one nefarious trickster of a word: Change. (Cue the “whomp, whomp” sound of a deflated trombone.)

Those who do ignite change use comprehensive and well–thought-out communication. They employ empathy for their audience, beginning to end.

For evidence, consider these three factors that the Project Management Institute (PMI) has identified as critical for effective organizational management:

Change is a familiar domain for our agency team; it’s often the trigger that brings our clients to us for communication strategy and execution. That made us curious to better understand empirically: What tend to be the weakest points in leaders’ instinctive approaches to change communication?

We surveyed hundreds of business leaders over a two-year period (2016-2018), gathering 217 respondents who identified that they would soon be or were in the midst of a major change initiative. We learned that many of them were falling into traps that may doom their change initiatives. Many identified that they didn’t have a solid communication plan, they didn’t have empathetic leadership (28%), and they insufficiently understood their audience’s perspectives and needs related to the change.

In the book Illuminate, authors Nancy Duarte and Patti Sanchez identify and discuss a VentureScape™. It’s a framework that encourages leaders to consider the needs and perspectives of their audience throughout a change journey. 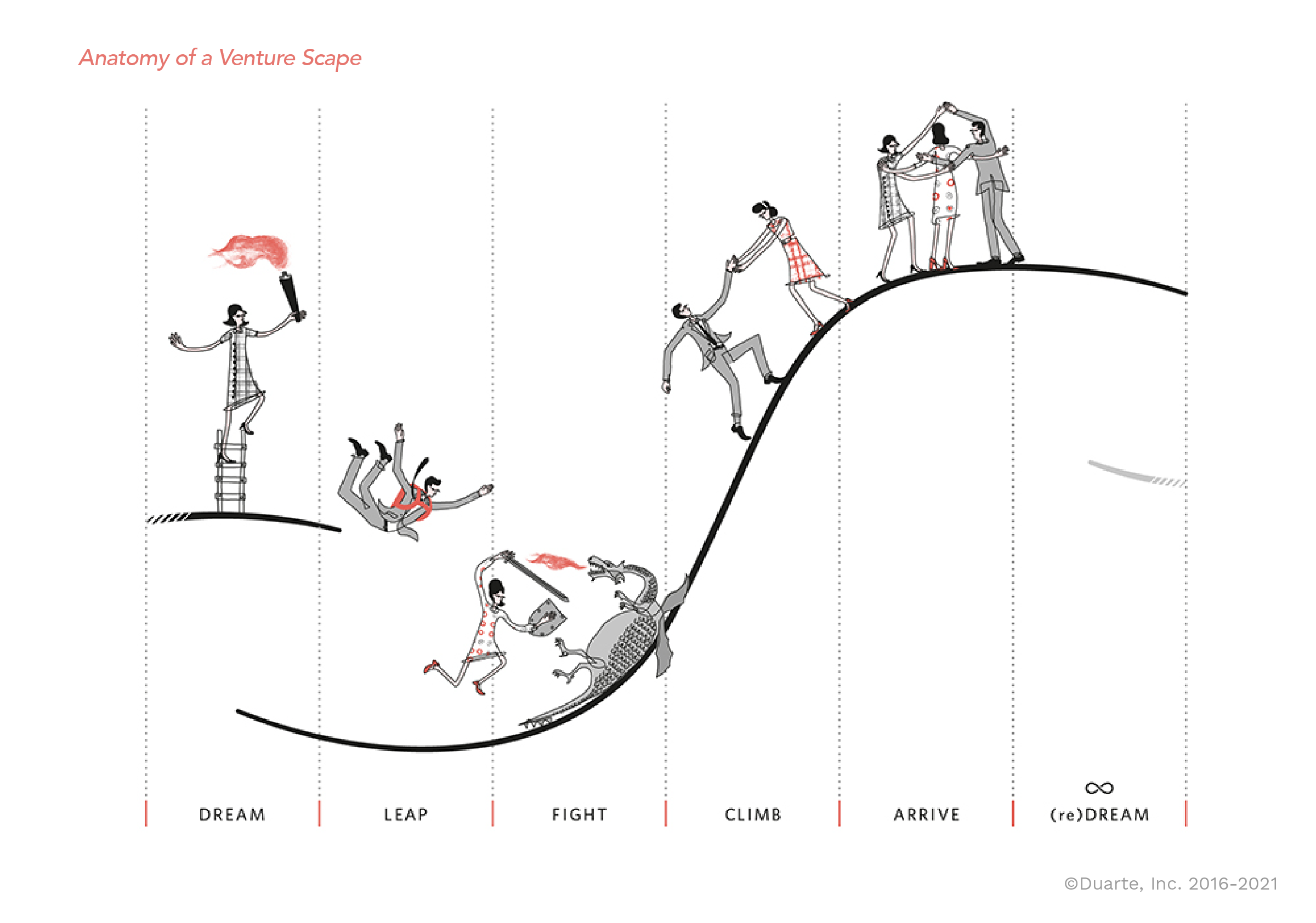 Considering the above-mentioned findings from McKinsey that most change initiatives fail, the findings from our data shouldn’t be surprising. However, as you will see, we found that some necessities of a successful change journey are – at times- missing.

13% said they disagreed somewhat or strongly that their communication team was clear on who their target audience was.

13% said they disagreed somewhat or strongly that leadership knew and agreed on who their target audience was. 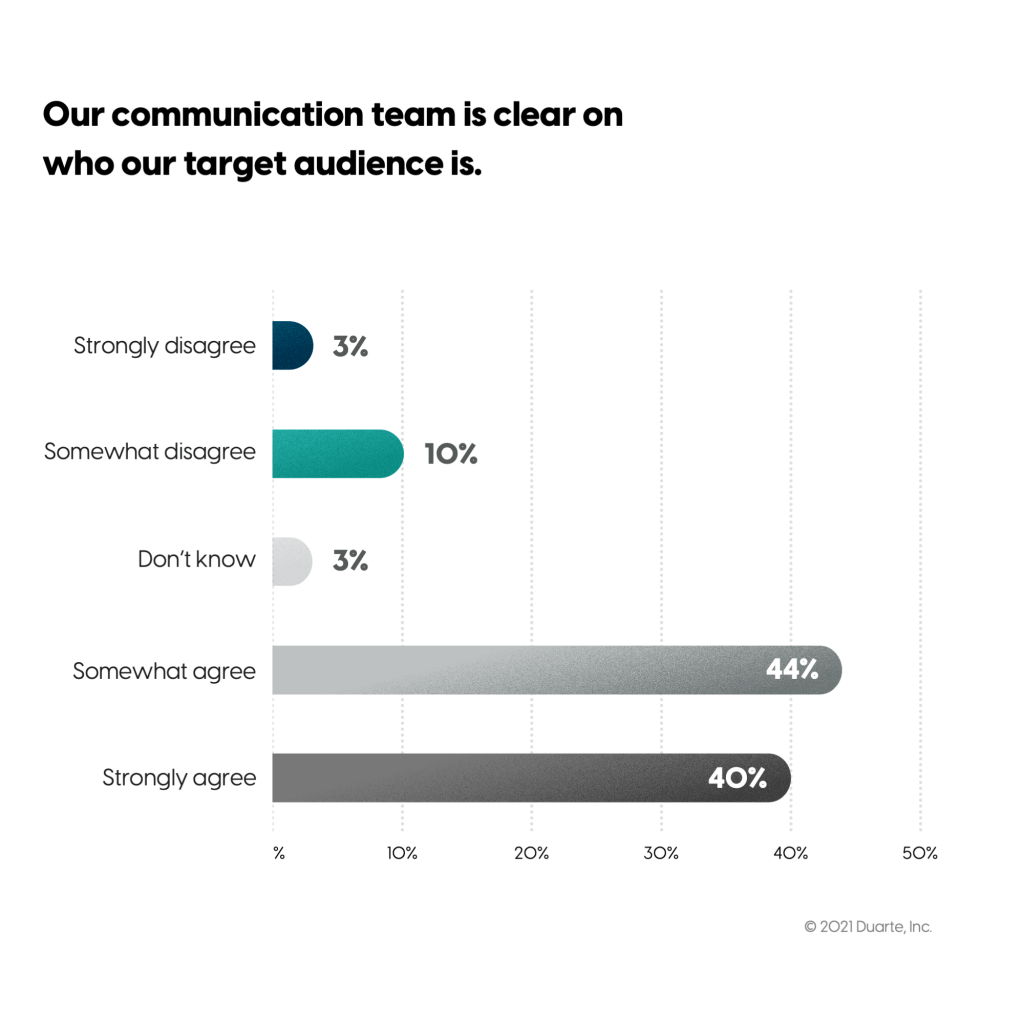 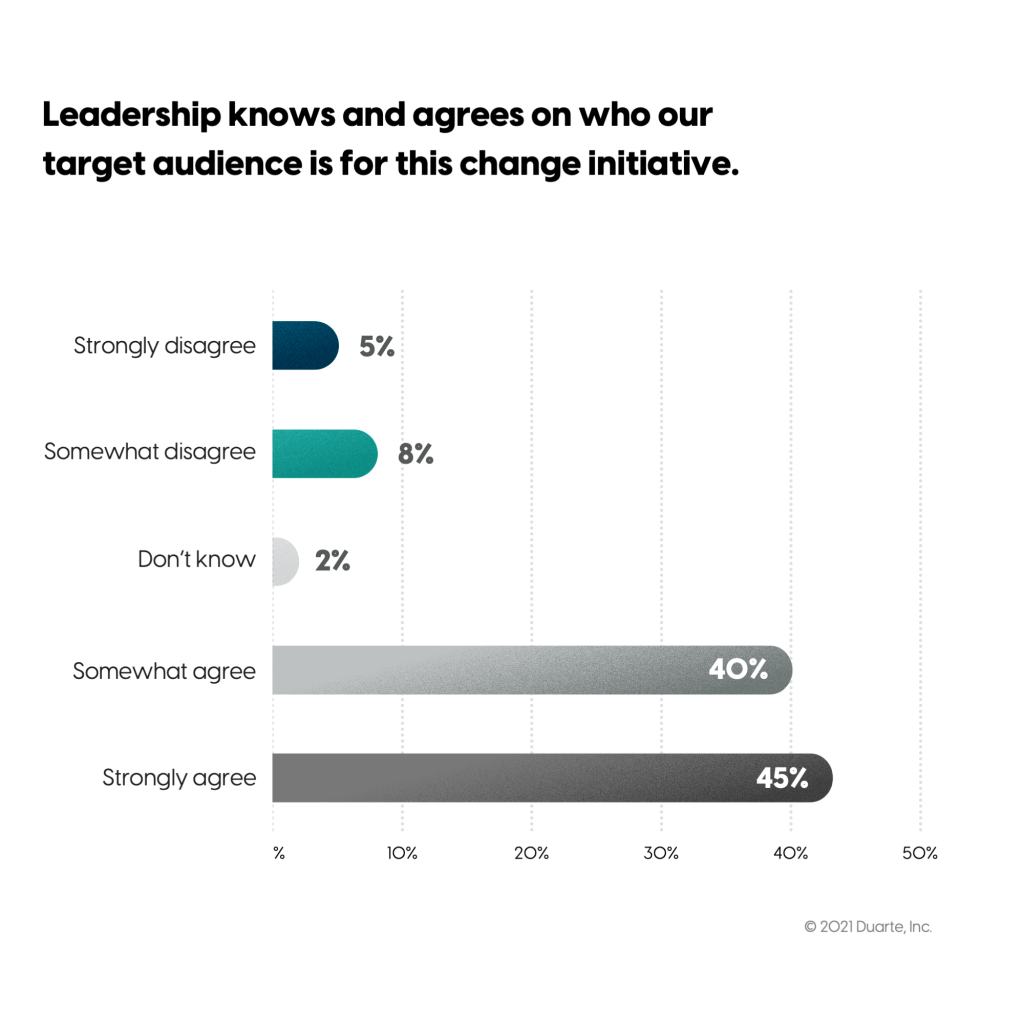 Second, if you want to communicate empathetically, you must understand how your audience is feeling, what they’re thinking, and what they need–not just at one moment in time, but throughout the journey. Half our change-leader respondents were winging it.

50% said they disagreed somewhat or strongly that their audience assumptions were based on data and/or research, not on gut. 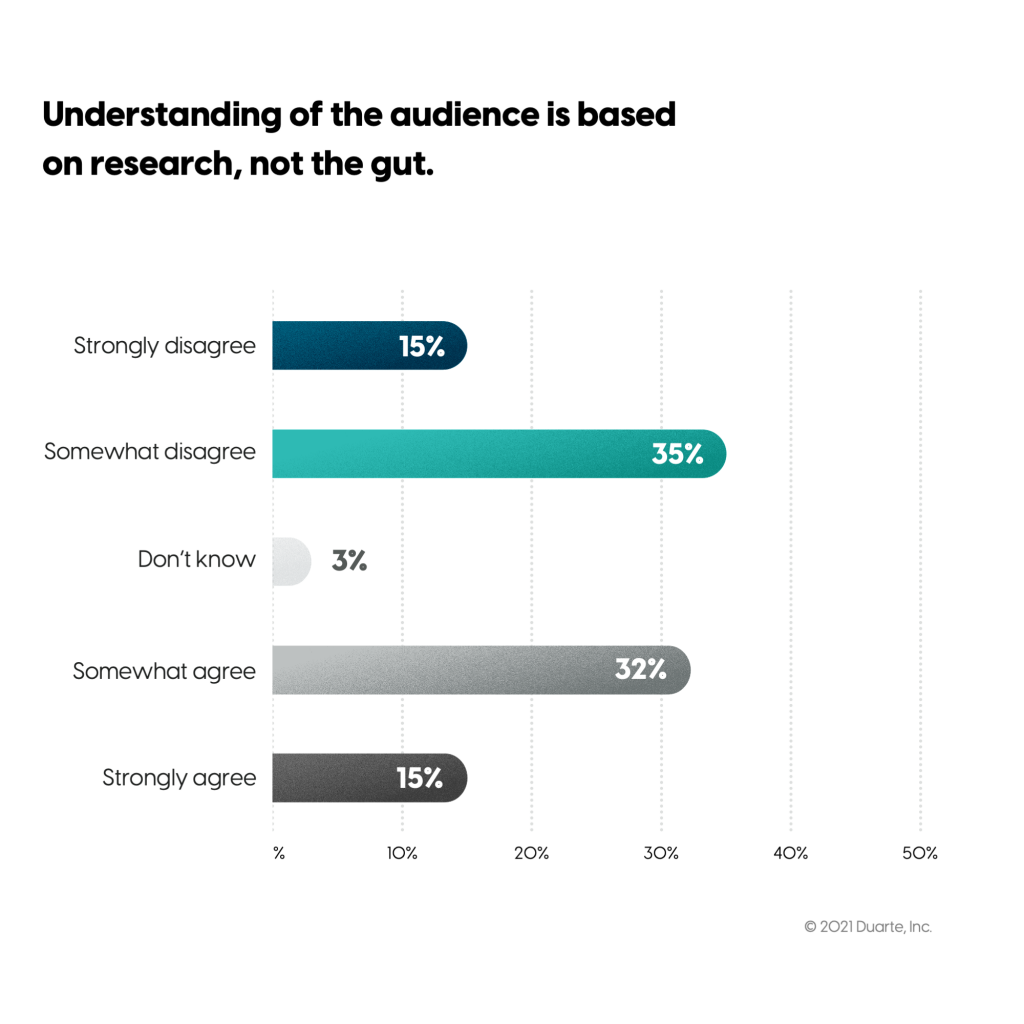 49% said they disagreed somewhat or strongly that they’ve documented what their audience will likely need to hear as they experience this change over time. 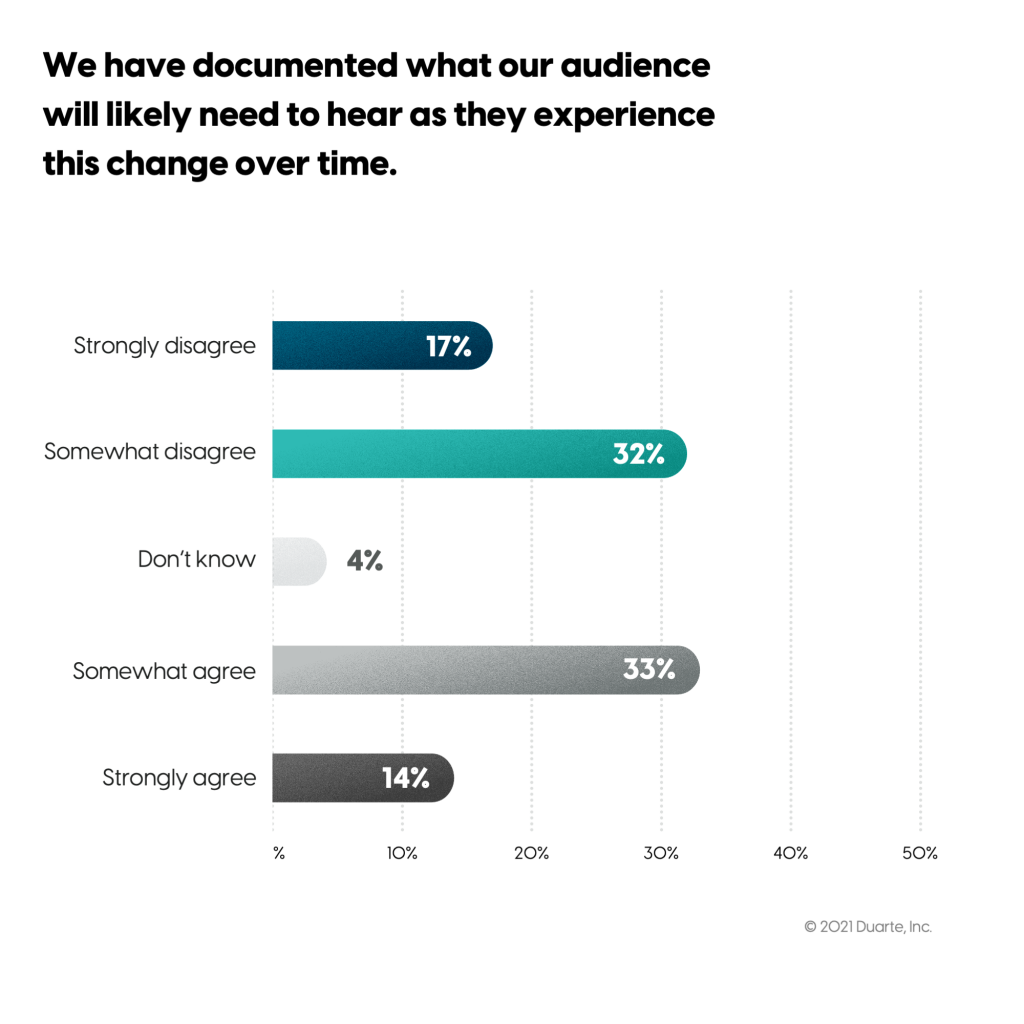 This number was particularly telling: 28% said they disagreed somewhat or strongly that they’ve even considered how audience sentiment about the change should impact the way they communicate. 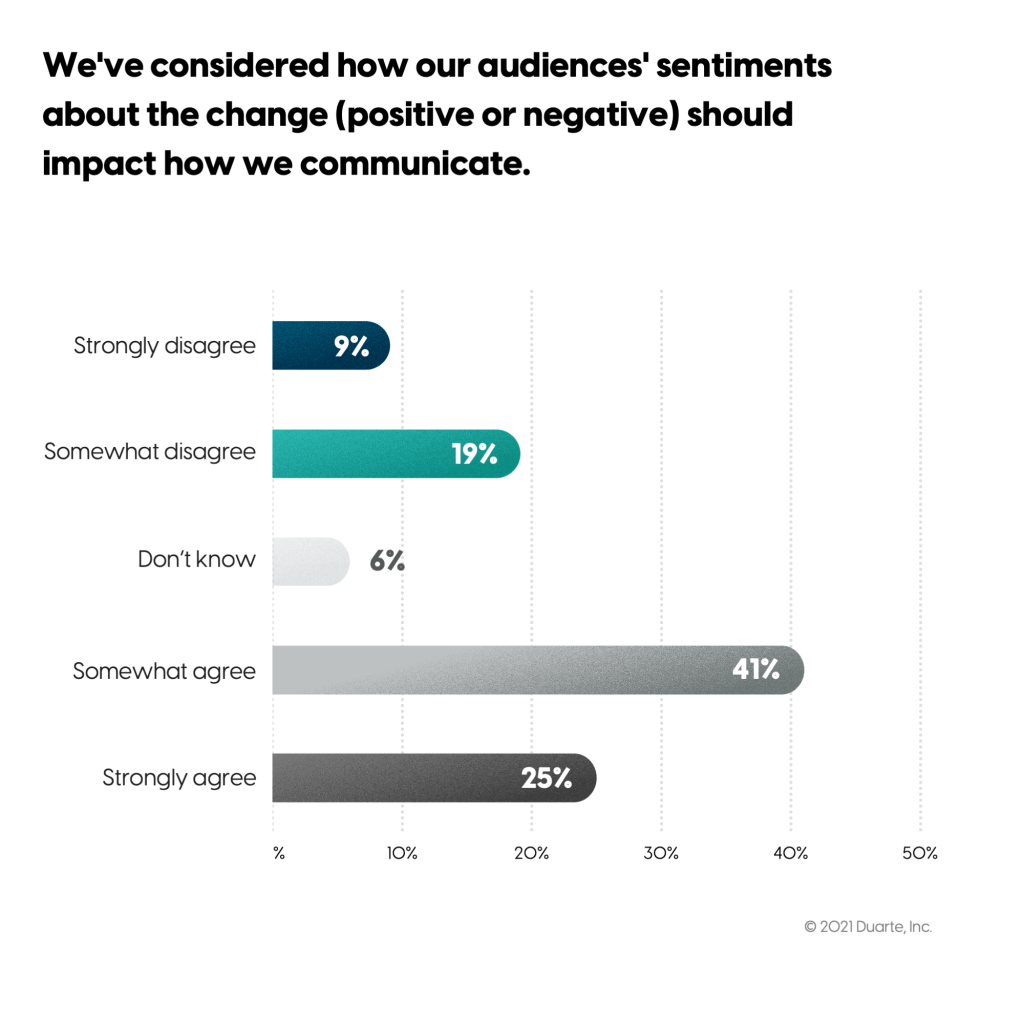 Finally, we found that 49% disagree somewhat or strongly that they have a communication plan in place that accounts for stages of the journey and varying audience mindsets. 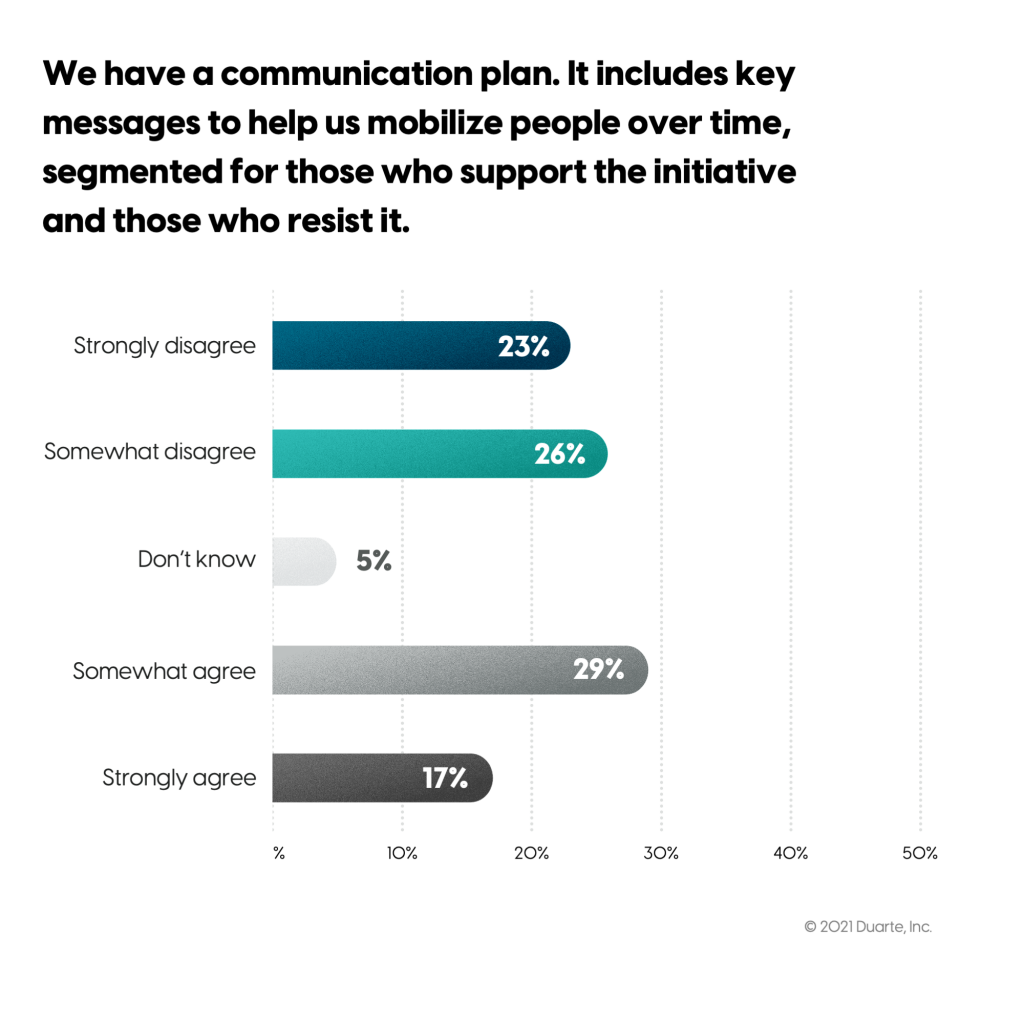 Whether you are seeking to lead a moment of change or a change movement, nailing down some of these fundamentals is key. Know who your audience is. Align leadership on that answer. Understand what that audience needs to know, hear, and experience–now and over time as your change journey unfolds. Base a communication plan on what you know.