Skill up and save 15% this week only using code CYBERWEEK22 at checkout. Explore training
Home / Resources / Blog / Duarte’s Diagrammer™: 4,000 Diagrams at Your Fingertips for 99 cents each

Duarte’s Diagrammer™: 4,000 Diagrams at Your Fingertips for 99 cents each

Where there is madness, Nancy Duarte finds method. This is how twenty years of sketches and infographic concepts became Diagrammer™, a searchable taxonomy of over 4,000 PowerPoint®-ready diagrams, available for you to download for just 99 cents each.

After more than twenty years of visualizing information for client presentations, Duarte designers had sketched thousands of concepts. Ever-anxious to find patterns and processes, Nancy gathered sketchbooks from each of the designers at Duarte. She then asked her trusty assistant (at the time, that was me!) to photocopy each of the pages of each of the books, so she could set to work cutting them to pieces, and sorting them. Nancy sat and sorted for hours, searching for patterns, deciding which concepts could be grouped, and which ones necessitated their own category. Lo and behold, a taxonomy emerged. This taxonomy of diagrams was featured in Chapter 3 of Nancy’s first book, Slide:ology, where it quickly became one of the book’s most popular sections.

Shortly after Slide:ology was released, its readers began to (politely) demand that Duarte offer training. And so began the development of the Slide:ology workshop. While creating the curriculum, the diagram concepts were converted into PowerPoint®, so they could be easily implemented by attendees. These diagrams garnered such an overwhelmingly positive response, and Nancy knew people were hungry for tools to help visualize their information. A team of people set to work creating thousands of PowerPoint®-ready diagrams, and now, nearly five years later, we are proud to announce Diagrammer™!

The taxonomy has been refined a bit since its first appearance in Slide:ology. There are five main categories–Flow, Network, Stack, Segment, and Join–which we believe encompass every type of relationship between information. Each of these categories has two or more subsets, to help further clarify your data. Check out the taxonomy below, or have it explained to you by a real Duarte lab tech, in just 96 seconds. 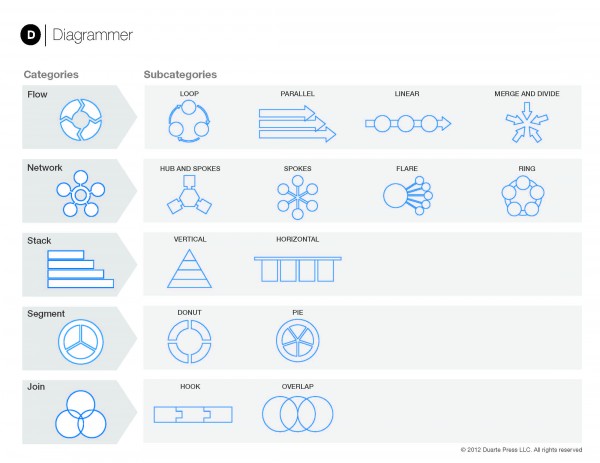 PowerPoint® is a trademark of Microsoft, Inc., registered in the U.S. and other countries.