Product Launches Should be a Big Deal

Matt Lauer said that the launch of Windows 7 was the most important launch Microsoft had done in ten years. If that’s true, why’d it suck so much?

But really, couldn’t Microsoft’s herd of press folks have come up with a catchier title? 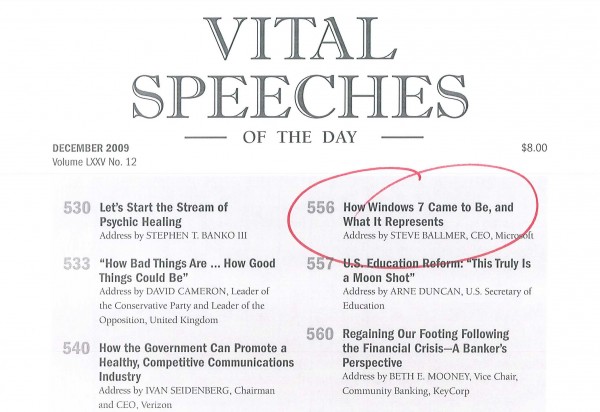 While writing the next book, I’ve been in speech analysis-mode, and have considered including an analysis on this speech as an example of what not to do… but I love PowerPoint too much to do that.

Below I’ve color-coded various sections of the speech, and included a poll so you can chime in at the end.

My first observation was that he refers to his audience as users, PCs, developers, and beta-testers. He could have called them all robots; none of those terms are very human. Next I noticed how much of the speech is allocated to conveying that that very same community built–or rather, fixed–the OS. He made it sound like they’re all building a camel instead of a visionary or revolutionary product. Oh, that’s right…they didn’t. I think this speech could be turned into a great object lesson for college (or high school) speech class.

Ballmer’s references to himself

Bold statement with no supporting information

It is a great honor and privilege for me to have a chance to be here today. I’m an enthusiastic personality, I think. I get a little fired up about things. And I’ll tell you, there’s not much that gets me more fired up than the chance to start selling, delivering, and letting customers enjoy Windows 7.

So today Windows 7 is available—45,000 stores around the world. It’s available on new PCs, the upgrade is available, and it’s just out there for all to start, hopefully, to appreciate and enjoy as much as our 8 million beta testers have done.

So today I get to say not only that I’m Steve Ballmer and I’m a PC, but I’m Steve Ballmer, and I’m a Windows 7 PC effective immediately. What is Windows 7 at the end of the day? What were we really most trying to do? We were trying to make the everyday usage of the PC better in the ways our customers wanted: Simpler, faster, more responsive. And so for the billion people who use Windows, for the perhaps as many as 300 million people who may buy a PC during the course of the next 12 months, we want to give a chance for people to have a better and better experience and at the same time, enable a world of new opportunities, new applications to do new things that you’re going to have a chance to see and witness as you’re here with us today.

What’s special about Windows 7 and the way it came together and why I think we have a little extra special secret sauce somehow in the making of Windows 7. And it really came about from an intense collaboration between our own engineering organization and our partners, a group of about 50,000 partners, software vendors, hardware vendors, peripheral vendors, and our customers. And our customers. Whether it’s all of the data that we get back from customers about how they’re using Windows and what they’d like to see different and improved, whether it’s the feedback we got from the 8 million beta test customers, all of that came together in a very unique blend. 3,000 world-class engineers at Microsoft, 50,000 partners with umpity-ump engineers there, and then the 8 million customers. And the 8 million customers were people from all around the world, 200 countries. You had teachers, small business owners, soccer moms. You had people stretching, if you will, from grandparents to gamers, people stretching from Australia to Iceland. Across the planet, feedback coming in from people in all walks of life really helping us think about and improve and make Windows 7 and Windows 7 PCs what our customers, I think, will really, really want.

One of the favorite things that the development team did during the course of building Windows 7 is create this thing in one of the R&D buildings that they called The Wishing Wall. And on the Wishing Wall, they collected and put up just a ton of customer feedback. Things that they called technical feedback, emotional feedback, to try to really bring alive in the physical world all of that information that we were getting back in the virtual world to help us tune the product. And to all of our customers who participated in giving us that input and feedback, I really want to have a chance to thank the beta test customers, and I want to thank all of our Windows users as we’ve gone over the last several years and literally hundreds of millions of new people have bought new PCs with Windows Vista and Windows XP. They’ve given us a lot of feedback that has allowed us to build a product that I think takes things really to a very, very new level.

I talked about simplicity but I want to give you a little bit broader characterization of Windows 7 overall. I think of Windows 7 in three major buckets: No. 1, it works the way you want to work. You want that computer to fire up quickly, boom. You want it to feel responsive, boom. You want longer battery life, boom. We needed to make those things work — simpler, faster, more responsive, leaner, less busy. And I think we’ve accomplished that with Windows 7.

No. 2, the things that you do all the time need to be simpler. You want to manage the windows on your desktop, you want to find the documents you most frequently use. Let’s make that stuff super, super simple. And then No. 3, let’s enable a world of new things, new possibilities for software developers and hardware developers and for end users. So you get a technology like multi-touch, which enables people to build new computers and new software. You get literally, I would say, from an end user perspective, dozens or hundreds of new features. And our experience throughout the beta test program is that everybody finds their own unique set of features to fall in love with. A road warrior like me, I love the new wireless networking. Media lovers like my three teenage sons—well, one of them is a little younger than that—my three sons, they really love the home group features. And everybody finds, from an end user perspective, the things that delight them and we’ve enabled a whole new world of possibilities for the hardware and software community. And I think that forms kind of the essence of what Windows needs to be. Windows needs to be an incredible opportunity for innovation for hardware companies, software companies, and it needs to be a place that is simple and easy to use and opens up the world of diverse innovation for the end user in a way that is manageable and consumable by billions of people around the world. Windows 7 takes us a step closer to the vision that we articulate that focuses in around three different screen sizes—PC, phone, and TV—all connected and communicating across the cloud, the Internet backbone.

We launched a new generation of Windows phones a few weeks ago. Today, you’ll see how that connects in and fits in the Windows 7 environment. We’ll show you new approaches today to use Windows 7 PCs to power scenarios that are entertaining, that run on your television set. And so we continue to move down this path of allowing the intelligence and information that you expect to be across all of the devices in your world, at home and at work, giving you the information, the entertainment, and the socialization, in addition to the productivity that you would expect. We’ll have a chance to show you some of how this comes together in just a minute as Brad Brooks starts his demo.

Today is a very good day. But the center, I think, of the day is really the product itself. And so what I’d like to do now is to invite up on stage Brad Brooks, Vice President from our Windows Marketing Group, and Brad is going to give you a fairly extensive walk-through of the product that is Windows 7 and some of the new Windows 7 PCs.