PowerPoint at war – how one soldier changed US strategy in Iraq

US forces in Iraq lowered their flag on Wednesday, officially marking the end of our nine-year military mission. As the final few thousand troops begin their journey home, we celebrate their bravery and mourn the thousands of lives lost during the war.

In a historic moment like this one, we also take the time to reflect on the people and events that changed the course of the conflict. One of those people was Captain Travis Patriquin.

In 2006 the Army sent Patriquin’s brigade to reclaim to the city of Ramadi from al Qaeda. At the time Ramadi was the source of some of the worst violence in the country, having claimed the lives of hundreds of US soldiers. As Patriquin got to know members of the Sunni community and an influential local sheik, he grew concerned about the ideas driving US strategy. He became convinced that the solution to the bloodshed was to arm and train the local Sunni tribes to aid in the fight against al Qaeda.

He created and circulated a now-infamous PowerPoint presentation entitled “How to Win in Anbar” which argued for this change in strategy. Captain Patriquin purposefully discarded most of the “bad” conventions he saw in military presentations – complicated infographics, long lists of bullet points – and instead used simple illustrations to focus on the story he wanted to tell. 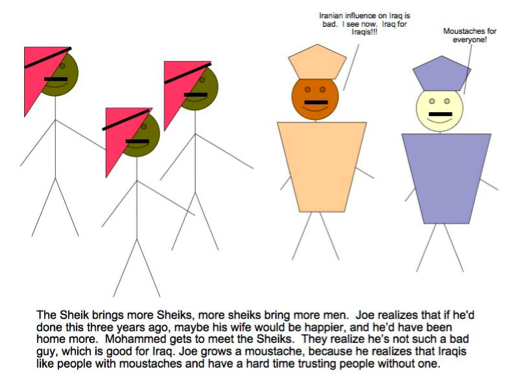 His design had the desired effect. His presentation went viral, getting passed around military servers around the world and eventually landing at the Pentagon. According to a recent book on Captain Patriquin’s legacy, it even ended up in the inbox of General David Petraeus.

Today, many credit Captain Patriquin with inspiring the “Sunni Awakening,” a phenomenon that helped hasten the end of the war. Col. Joe Harrington, the current executive assistant to the chairman of the Joint Chiefs of Staff, was recently quoted as saying that “Travis Patriquin has as much to do with the success that the Americans and the Iraqi government has as anyone else.”

Tragically, Captain Patriquin is not here to witness the success of his ideas. He was killed by an improvised explosive device in Iraq in December 2006. But he left behind a powerful legacy of service and a reminder to all of us that good ideas have the power to change the world.