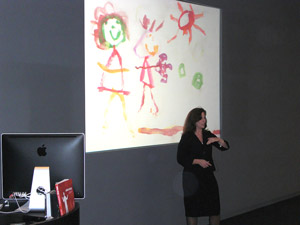 Presenting at the Apple store was surreal.

There was a nice enthusiastic crowd which included folks from O’Reilly, some family, some TEDsters, Tony Zander (who took the photos for me) and Bert Decker and his wife Dru. Bert did a great blog post on the power of Twitter for this event. He used Flip Video to capture the event. I think I need one of these. I tie my Twitter into my Facebook status so I only have to update one place. I’m not sure what happened in the last two days but I’ve had over 30 Twitter invites. I can’t seem to find the blog or article that pointed this way but it’s a great way to see immediate bursts of blog and press attention. It might have been Garr’s tweet that pointed to Bert’s blog post.

Getting into the Apple store is a huge milestone for me. Almost all the books in the store are on how to use applications so mine really stands out. Look how lovely slide:ology looks on their shelves: 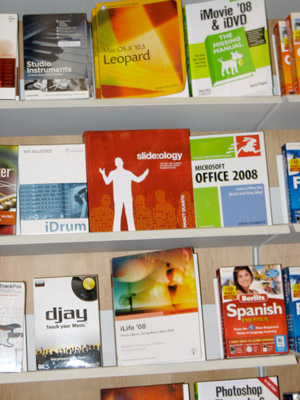 I won huge Mom points with my 18-year old son who put the Apple Store announcement on his Facebook page. He’s the one who talked me into buying a Mac years ago by telling me, “If you carry a Mac instead of a PC, you’ll look 15 pounds lighter.” That’s all I needed for a sales pitch.

In other news, they gave slide:ology away at the Convergence Conference last week in addition to the TED book club which is pretty cool.

There are two more speaking engagements in the next two weeks. Ryan Orcutt and I will be presenting at Carnegie Mellon University. We’ll be working on Wednesday with the design grad students and critiquing the work they’re doing for the AIGA Aspen Design Challenge. After that, we hold a workshop on diagrams and data and than Thursday evening there’ll be a public lecture which you’re all invited to.

After that, I’ll visit my Mom and sister in Hattiesburg, MS and then head up to NYC to speak at Columbia Business School at NYU. That presentation is from 12:30 to 2pm at Warren Hall.

After that little whirlwind, the family is coming to meet me in NYC and we plan to watch the Thanksgiving day parade, eat Thanksgiving dinner at Tavern on the Green, see an opera and Irving Berlin’s White Christmas. It just doesn’t get better than that!