We all know what it’s like to sit through a bad presentation. We can easily spot the flaws — too long, too boring, indecipherable, what have you — when we watch others speak. The thing is, when we take the stage ourselves, many of us fall into the same presentation mistakes.

Here are five of the most common presentation mistakes, along with some tips on how to avoid them.

You risk losing your audience when you just “state the facts,” even in a business setting. No presentation should be devoid of emotion, no matter how cerebral the topic or the audience. Speak to people’s hearts as well as their minds.

Look for ways to add emotional texture to your exhibits, data, proofs, logical arguments, and other analytical content. Try opening with a story your audience can relate to, for example, or including analogies that make your data more meaningful.

To unearth the emotional appeal of your ideas, ask yourself a series of “why” questions. If you’re requesting funding to pay for cloud storage, for instance, start by asking, “Why do we need cloud storage?” Your answer may be something like “to facilitate data sharing with colleagues in remote locations.”

Then ask why you need to accomplish that— and you’ll eventually get to the human beings who will be affected by your ideas. Suppose your answer is “to help remote colleagues coordinate disaster relief efforts and save lives.” That’s your emotional hook. Once you’ve found it, it’s easier to choose words and images that elicit empathy and support.

2. Asking Too Much of Your Slides

PowerPoint™ can be a great tool. But know what you’re trying to accomplish with it. Do only that, nothing more. Problems crop up when you place too many elements in a slide deck. If you cram in all the points you’re going to cover so you won’t forget anything, you’ll end up projecting entire documents when you speak. (Garr Reynolds aptly calls these hydra-headed beasts “slideuments.”)

No one wants to attend a plodding read-along. It’s boring, and people can read more efficiently on their own, anyway. So don’t try to spell everything out bullet by exhausting bullet. Keep your teleprompter text hidden from the audience’s view, in the “notes” field, and project only visuals that reinforce your ideas. And if you need to circulate documents afterward? Create handouts from all that text you’ve pulled off your slides and moved into “notes.”

Nothing gets eyes a-glazing like a visual cliché. Want your presentation to stand out (in a good way) from the others your audience has seen? Brainstorm lots of visual concepts — and throw away the first ones that came to mind. They’re the ones that occur to everyone else, too. That’s why you’ve seen them a million times in other people’s presentations. Generate several ideas for each concept you want to illustrate, and you’ll work your way toward originality. 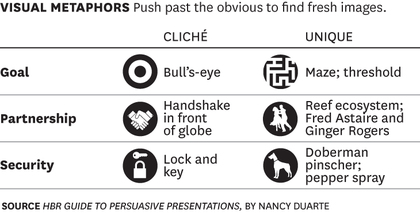 Have you ever listened to a presenter who sounded super-smart without having any idea what she really said? If so, the presentation was probably full of jargon. Each field has its own lexicon that’s familiar to experts but foreign to everyone else. Unless you’re speaking to a group of people who are steeped in the material themselves, you’re better off avoiding highly technical or industry-specific language.

Use words that will resonate with those whose support and influence you must earn. If they can’t follow your ideas, they won’t adopt them. Consider whether your presentation passes the “grandmother test”: If your grandmother wouldn’t understand what on earth you’re talking about, rework your message.

5. Going over Your Allotted Time

One of the worst presentation mistakes you can make, is speaking for too long. A great talk goes by quickly. People in your audience will never scold you for ending early, but they certainly will for ending late. So treat the time slot assigned to you as sacred. And keep in mind that people have a 30- to 40-minute presentation tolerance (they’re conditioned by TV shows with creatively produced commercial breaks). Go longer than that, and they’re sure to squirm.

Cut Through the Noise: How to Design Slides for Virtual Presentations

Before you start pushing pixels on your next slide, take a moment to put on your design thinking cap.... […] Continue reading

Delivering Dynamic Virtual Presentations: How to Stand out in the Crowd

These days, we’re all inundated with virtual presenters. It seems every week we’re sitting through more and more virtual... […] Continue reading

Facilitating Virtual Collaboration: Tips and Tricks for Being Creative Virtually

While our new virtual world has changed the way we do business, it hasn’t stopped the creative wheel. Many... […] Continue reading

5 Things CanceledCon Taught Me About Virtual Events and Life

At the end of February, I found out that an event I was looking forward to—Creative South—was getting postponed,... […] Continue reading

Step Up Your Virtual Setup: Quick Fixes to Look and Sound Great From Anywhere

We’ve all been there. Receiving a virtual pitch from a backlit silhouette or straining to understand the garbled audio... […] Continue reading

3 Ways to Inspire Others with Data Stories

Data helps organizations gain valuable insights into customers, employees, products and markets, but there is a limit to what... […] Continue reading

How to Lead Better Virtual Meetings

Leading effective meetings is hard enough; and suddenly, we all have to be just as effective without the benefits... […] Continue reading

Leila Janah was a powerful speaker who could capture and hold the attention of her audience. During speeches and... […] Continue reading