3 Components Of A Presentation's Big Idea

A big idea is that one key message you want to communicate. It contains the impetus that compels the audience to set a new course with a new compass heading. Screenwriters call this the “controlling idea.” It’s also been called the gist, the takeaway, the thesis statement, or the single unifying message.

There are three components of a big idea:

/ ONE A big idea must convey your unique perspective. Your audience showed up to hear you speak. They’re sitting there to learn your point of view, and you should clearly and completely articulate it. For example, “the fate of the oceans,” is only a topic, not a big idea. “Worldwide pollution is killing the ocean and us,” is a big idea with a unique perspective. Your big idea doesn’t need to be so unusual that no presenter has ever expressed it before. But it must be unique to you, not merely a generalization.

/ TWO A big idea must communicate what’s at stake. You need to articulate to the audience why they should care enough about your perspective to adopt it. The big idea, “Replenish the wetlands through new legislation,” doesn’t convey what’s at stake. In contrast, “Without better legislation, the destruction of the wetlands will cost the Florida economy $70 billion by 2025,” provides a strong reason to care. When you convey what’s at stake, you help your audience understand why they should participate and become heroes. Without compelling reasons for the audience to engage, your big idea won’t get off the ground.

/ THREE A big idea must be stated as a complete sentence. When you state your big idea as a complete sentence it forces you to use a noun and a verb. If presenters are asked what their presentation is about, they usually respond with phrases such as, “the third quarter update,” or “our company’s new software.” These are not big ideas. A big idea must be expressed in a complete sentence such as, “This software will increase your team’s productivity 10 percent and boost revenues over the next year by $1 million.” Using “you” in the sentence makes it even better, because it ensures that you have a clear audience in mind.

Emotion is another important component to the big idea. Boiling down all of the various emotions simplifies this task. Ultimately, there are only two emotions—pleasure and pain. A truly persuasive presentation plays on those emotions to do one of the following:

For example, a business presentation that centers on “We are losing our competitive advantage” as its big idea, has nothing at stake. In contrast, the message “If we don’t regain our competitive advantage, your jobs are in jeopardy” makes it clear that there’s plenty at stake! It appeals to employees’ human instinct to survive. Humans change when there is a threat and sense of urgency. In the January 2007 issue of Harvard Business Review, John P. Kotter explained “most successful change efforts begin when some individuals or groups start to look hard at a company’s competitive situation, market position, technological trends, and financial performance. They then find ways to communicate this information broadly and dramatically, especially with respect to crises, potential crises, or great opportunities that are very timely.”

The gravity of the presentation should match the severity of the situation and accurately reflect what’s at stake—no more, no less. 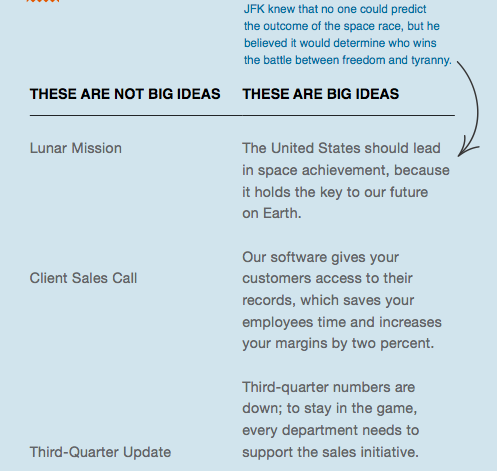