When it comes to animating in PowerPoint, there’s a spirit of one-upmanship here at Duarte. Every so often, one of our designers will share an amazing animated piece that they made entirely in PowerPoint. This kind of experimentation leads to innovation and discovery of new techniques that we employ in our work for clients. It’s a pretty awesome feedback loop rotating around the pursuit of delight.

For several years, I’ve been eyeballing the intro sequence for the animated show, “Archer” on FX. It’s a beautiful, energetic piece of visual storytelling, pulling influence from Saul Bass’s work on motion picture title sequences. The clean lines and 2D animation make it the perfect candidate for a PowerPoint homage. Tired of always hearing me mumble about how I could “totally recreate that in PowerPoint,” my wife finally challenged me to put up or shut up.

Here is the original, in case you aren’t familiar. Below is my PowerPoint version, exported as a video for easy viewing, and here is a link to the PowerPoint file.

Read on for some of the most asked questions I received after sharing this with friends and co-workers on how I was able to create this PowerPoint animation.

Q: Why do you geek out on pushing the limits of PowerPoint animation? Wouldn’t video be more suitable?

A: We are often asked to do things with PowerPoint animation when it could more easily be done in video, in order to keep file sizes low. The nature of presentations is that they’re portable, and our clients are often looking for cinematic experiences that can still be emailed.

Q: Did you use any video components in this PowerPoint animation?

A: Using video assets would have defeated the whole point of this. The Archer intro sequence appealed to me because, other than a few moments of character animation, pretty much everything boiled down to shapes changing size and position. At first glance, a person might feel limited to using the PowerPoint animation presets (Fade In, Fly Out, Wipe, etc.)  All this requires is a shift in thinking. Traditional animation principles like Squash & Stretch, Slow In & Slow Out, Overlapping Action, and Anticipation are all available to a person with a little ingenuity. 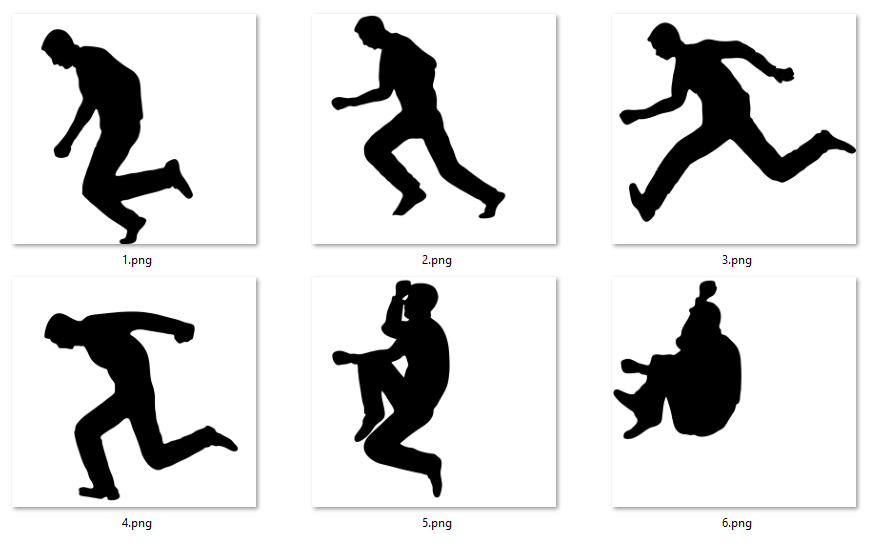 Q: But what about that character animation?

A: I created stop-motion sequences for a few of these complex scenes. Basically, this meant creating vector silhouettes of the character in different poses, and having them appear and disappear to create walk-cycles. I felt like this technique could turn into a crutch if I leaned too heavily on it, so you’ll notice that the walking animation in the opening scene is made entirely of looping Motion Paths and Spin PowerPoint animations. This was a bit time-consuming since there is no character rigging or puppet tool available in PowerPoint. The thighs, calves, and feet are not connected at the knees and ankles, so each body part had to be moved and rotated independently. It’s not ideal but that’s the point. With a little sleight of hand, and careful positioning of pivot points, the illusion came together really well. 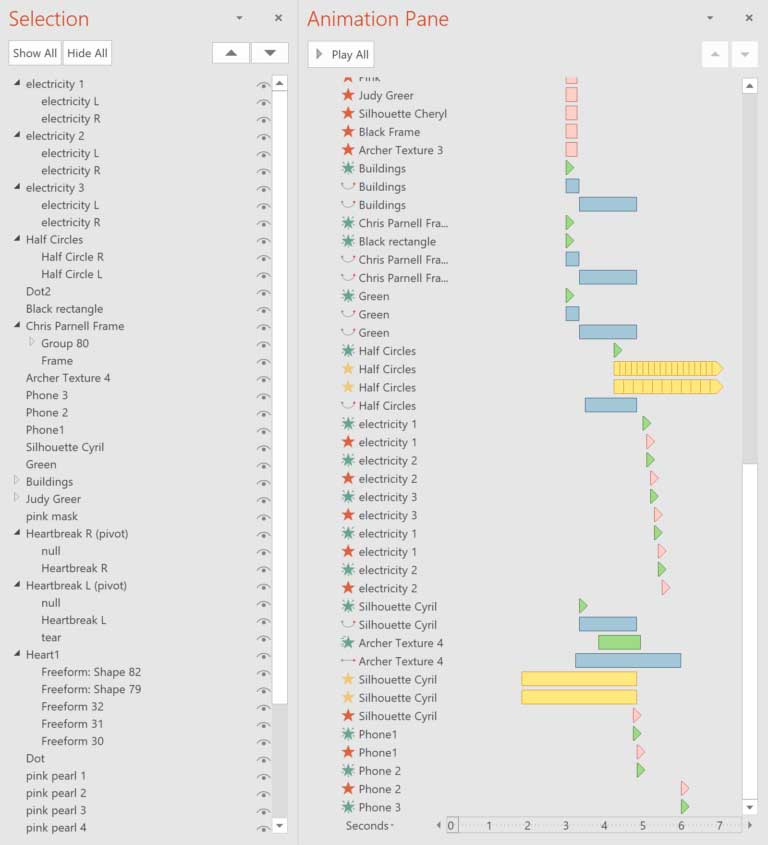 Q: Did you redraw all of this?

A: For the most part, yes. I recreated all the silhouettes in Adobe Illustrator and dropped them into PowerPoint as vector art to keep things crisp. In the interest of time, some of the silhouettes were a little rough around the edges, but it’s a fast-moving animation so the lack of precision is forgivable. To make the schematic/blueprint textures, I created a large reference image by stitching together single frames of the original to make a large mosaic, then interpolated the parts of the schematics that were hidden. Again, some of this isn’t going to perfectly match the original, but it was enough to get the job done.

Q: How did you time the music?

A: Syncing audio to animations that span multiple slides in PowerPoint is hard, because the timing can shift a little depending on the specs of the device handling the playback. The music is triggered when the first animation happens, and from there I would play the entire file every time I finished another “slide” to make sure things hadn’t fallen out of sync. If the PowerPoint animation was leading or dragging too much, I would make tiny adjustments in the animation pane to compensate. If you compare this to the original, you’ll probably notice that certain moves don’t happen exactly on-beat like they were meant to. The fact that it’s only 30 seconds long is another reason why this was such an ideal piece to recreate. Any longer, and things can get unpredictable. 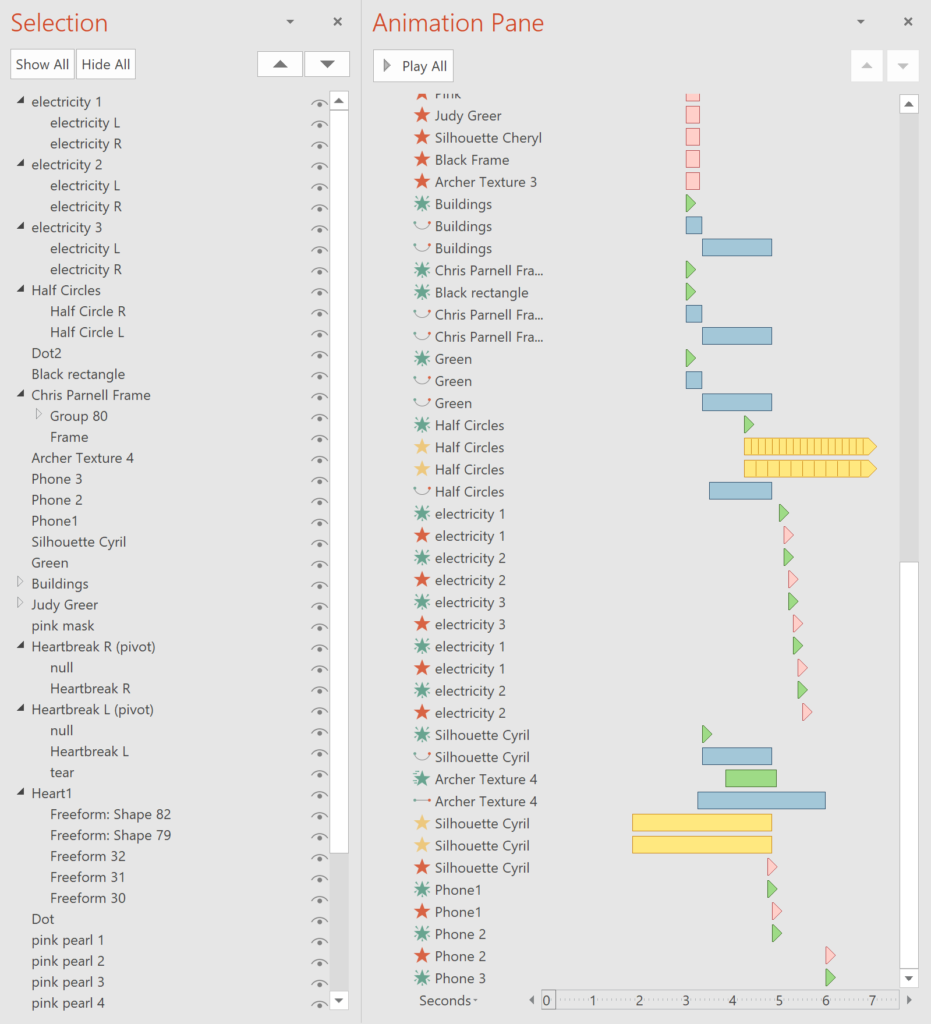 Q: These PowerPoint animation panes are crazy. Do you have any tips for staying organized?

A: First, it makes things much easier to edit when you don’t have a thousand PowerPoint animations stacked on top of each other in a single slide. Thankfully, the Archer intro is broken into logical vignettes where each character is featured. This allowed me to break each scene out as a separate slide. After that, I made sure the transitions were set to “none” so that it would advance from slide to slide, seamlessly.

Another tip for staying organized is to label each and every object in the selection pane. It’s hard to stay oriented if all your shapes are named things like “shape 12” and “Oval 6,” so a little time spent renaming everything keeps you from getting frazzled, down the road.

Q: Is there anything you wish you could have done, but couldn’t due to the limitations of PowerPoint animation?

A: Oh yeah. I have a laundry list of feature requests for Microsoft’s PowerPoint team. The one thing I just couldn’t pull off is the blending modes that are used on the schematic/blueprints. In the original animation, you can see that the colors shift and multiply as those blueprints pass over other colors objects. PowerPoint doesn’t have blending modes, so we tend to use a lot of tricks at Duarte to work around this limitation. Usually this means faking the blending mode by manually coloring the overlapping area. Unfortunately these blueprint textures are in motion, so my normal tricks wouldn’t work. In the end, I made the textures white and reduced the opacity to 50% and called it a day.

Q: Are there any other clips from TV or film that you want to try PowerPoint animation with?

A: I’ve been kind of captivated by the style that Elastic is bringing to title sequences (West World, Daredevil, The Night Manager) but they’re almost exclusively 3-dimensional. 2D or 2.5D animation tends to be more within the realm of possibility. The second half of the Kung Fu Panda end-credits is beautiful and mostly 2D, but redrawing all that would be a real challenge. This is why so many of us look to Saul Bass-inspired work for inspiration. The Catch Me if You Can intro sequence is like the holy grail for a lot of us, but it has some 3D rotations and perspective-moves that make it, maddeningly, just slightly out of reach. So for now, I’m going to sit back and wait for an epiphany, or for that spirit of Duarte one-upsmanship to catch me by surprise. Whichever comes first, it’ll be a great day.

Four Storytelling Techniques to Bring Your Data to Life

The adage that “our world runs on data” means that decisions are being based on vast amounts of statistics.... […] Continue reading

5 Ways to Motivate Your Team With Empathy and Authority

A crisis pressure-tests leadership and culture. Many new values are formed under the strain, and employees gain new perspectives... […] Continue reading

Good Leadership Is About Communicating “Why”

In an ongoing crisis, clear communication is more important and more difficult than when things seem normal. Employees and... […] Continue reading

Recently, I met a friend for coffee and upon arrival noticed he was rocking an Airpod, but only in... […] Continue reading