We rarely think about whether presentations are the right way to communicate; we just blindly create and deliver them. By some estimates, 350 presentations, on average, are delivered every second of every day.

Unfortunately, presentations can’t be the Swiss Army knife of communication. Though they’re one of the most powerful tools we have for moving an audience, even the most carefully crafted talks won’t be effective if they’re not delivered in the right context. Sometimes, a conversation is much more appropriate and effective.

How do you know when that’s the case? Ask yourself what you want to get out of the time you have with the group. Do you need to simultaneously inform, entertain, and persuade your audience to adopt a line of thinking or to take action? Or do you need to gather more information, have a discussion, or drive the group toward consensus to get to your desired next step? Generally, if your idea would be best served by more interaction with your audience, you should probably have a conversation instead of delivering a presentation.

The best conversations will happen when you’ve briefed everyone ahead of time on the information you’re going to discuss. (Otherwise, you waste valuable meeting time playing catch-up instead of working toward your goal.) To get everyone up to speed, create a visual document in presentation software — what I call a Slidedoc – and circulate it before the meeting.

Of course, it’s common practice to circulate decks of slides before meetings, but often they’re too opaque to be understood without guidance from a presenter — or they’re so packed with “teleprompter” text that people have a hard time digesting them. Asking everyone to decode your cryptic bullets or plow through a lot of verbiage before you meet is setting yourself up for disappointment. Nobody has the time, and your ideas could get lost in translation. So give people a document that’s meant to be read, not presented. One they’ll grasp quickly and easily on their own.

You can create a Slidedoc by re-chunking your message into key points and illustrating them with pictures or diagrams, along these lines: 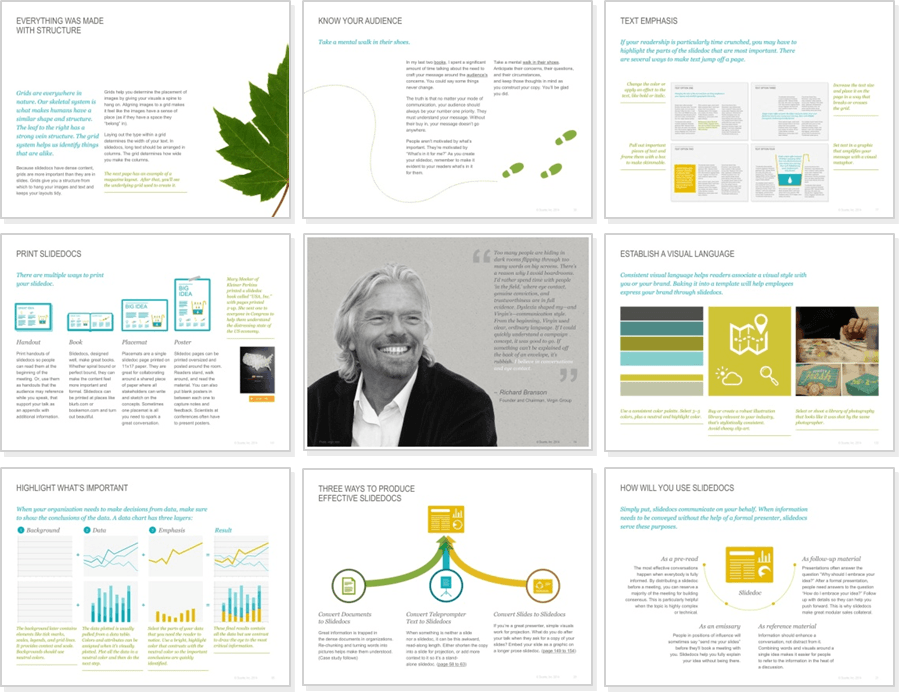 Studies show that this combination — concise text paired with visuals — helps people understand and retain concepts more easily. As clinical psychologist and author Haig Kouyoumdjian points out, “Our brain is mainly an image processor (much of our sensory cortex is devoted to vision), not a word processor. In fact, the part of the brain used to process words is quite small in comparison to the part that processes visual images.” So, pare down the wording, but leave enough context to allow your deck to live on its own without your voiceover.

Slidedocs can serve not only as prereading for conversations but also as emissaries and follow-up material. For example, when people in positions of influence say, “Send me your slides,” before they’ll book a meeting with you, you can e-mail them a Slidedoc with all the relevant information. Slidedocs can also outline what people can do to give your idea traction after you’ve sold them on its value in a presentation.

But why use presentation software for these types of communication? Because it allows you to create modular content that’s easy to share, and it’s much easier for the layperson to use when combining visuals and prose than, say, professional design software. For both reasons, it will extend the reach of your ideas — which is, after all, the point.

5 Reasons Why Your Story Falls Flat

For years, communicators have been told about the importance of telling a story in a professional or business setting.... […] Continue reading

3 Situations that Demand a Story

Critical communications require you to influence an audience. Whether you’re asking a customer for a sale, motivating your team... […] Continue reading

3 Leaders Who Effectively Use Storytelling to Transform

Great leaders rely on varied communication tools to inspire their teams and influence others to take action. But there’s... […] Continue reading

These Screenwriting Principles Will Make Your Business Story More Engaging

Every human interprets situations, instances, and occurrences around us through the lens of story. Stories help us frame the... […] Continue reading