Listen and connect more effectively with our NEW Adaptive Listening workshop. Explore training
Home / Resources / Blog / You’ve Got to be Believed to be Heard

You’ve Got to be Believed to be Heard

Mark and I went out of town to a wedding last weekend, and drove home very late Sunday night. To help him stay awake, I read the new release of Bert Decker’s book You’ve Got to be Believed to be Heard aloud in the car. Mark was so wrapped up in the stories that after our caffeine pit stop, we hopped on the freeway heading the wrong direction, and drove for 20 minutes before realizing it!

This updated version of Bert’s book is fantastic. He has compiled numerous little-known and very well-told stories about some of our best and worst communicators. Politicians, war heroes, athletes, CEOs, and even a few obscure communicators that you grow to love. Each story touches on how individuals gain believability through their enthusiasm, storytelling, and emotional connection.

One particular point about eye communication rang true for me. I do this weird slow blink thing–my kids have bugged me about it for years. I haven’t worked hard at stopping but I sure will now. In Bert’s chapter called The Eye Factor, he says that a slow blink makes you appear aloof, cold, and detached. Ouch.

My droopy blinks are such a problem for my son that he sent me this screen shot of Lucille Bluth (affectionately called Gangy) from Arrested Development, so I could keep it on my desk as a reminder of what NOT to do. (I’ll use another post to explain the parallels my family has drawn between me and Gangy…but I’ll need a cocktail first.) Yep–she’s aloof, cold, and detached. 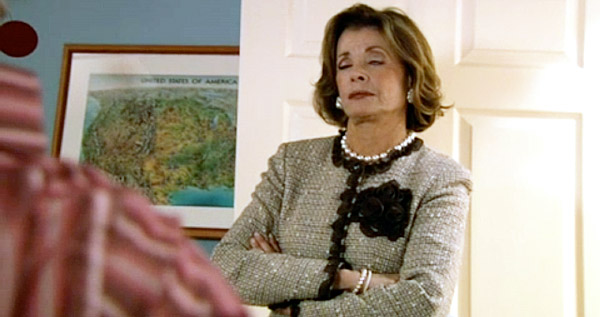 When Amazon posted this video for my book, my dear friend Jerry Weissman called with an urgent voicemail pleading with me to pull it down immediately ‘cause it would ruin book sales (everyone needs a friend like Jerry–he’s saved me from myself more often than a friend should have to.)

I had taped the video in one single take after several sleepless nights right before a vacation. Alas, my famous slow blink in all its aloof glory. We sent a new video to Amazon (see below) and I’m working harder than ever on my blinking skills.

“Eye communication is your number one skill. It ranks first because it has the greatest impact on both one-on-one communications and large group communications. It literally connects mind to mind. Since your eyes are the only part of your central nervous system that is in direct contact with another human being. When your eyes meet the eyes of another person, you make a First-Brain-to-First-Brain connection. When you fail to make that connection, it matters very little what you say.”

As communicators, it’s integral that we’re trusted because that’s what helps us be heard. And you’ve got to be heard in order to persuade.