When Presenting Data, Get to the Point Fast

Projecting your data on slides puts you at an immediate disadvantage: When you’re giving a presentation, people can’t pull the numbers in for a closer look or take as much time to examine them as they can with a report or a white paper. That’s why you need to direct their attention. What do you want people to get from your data? What’s the message you want them to take away when presenting data?

Data slides aren’t really about the data. They’re about the meaning of the data. And it’s up to you to make that meaning clear before you click away. Otherwise, the audience won’t process—let alone buy—your argument.

Take this table, for instance: 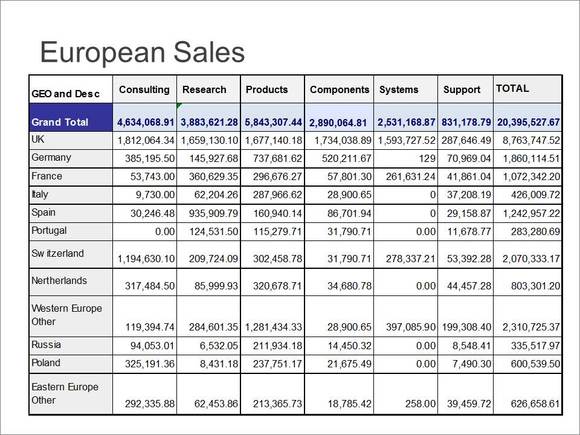 Presenting data is confusing—especially if you project it for five seconds and then move on. And even if you leave it up for five minutes while you talk, anyone who’s struggling to derive meaning from it won’t be paying much attention to what you have to say. They’ll be too busy squinting from their seats, trying to navigate all those heavy grid lines that give every single cell equal weight. It’s not at all clear where the eye should go. Your audience won’t know what direction to read—horizontally or vertically—or what conclusions to draw. Though the Grand Total line is emphasized, is that really the main point you want to convey?

Now let’s look at presenting data presented more simply. Say you’ve identified three business units with potential for sustained growth in Europe. By eliminating the dense matrix and connecting only key numbers to a pie with leader lines, you remove clutter that distracts from your message. And notice the clear hierarchy of information: You can highlight important pieces of the pie by rendering them in color and their corresponding annotations in large, blue type. Other sections recede to the background, where they belong, with their neutral shades and small, gray labels. 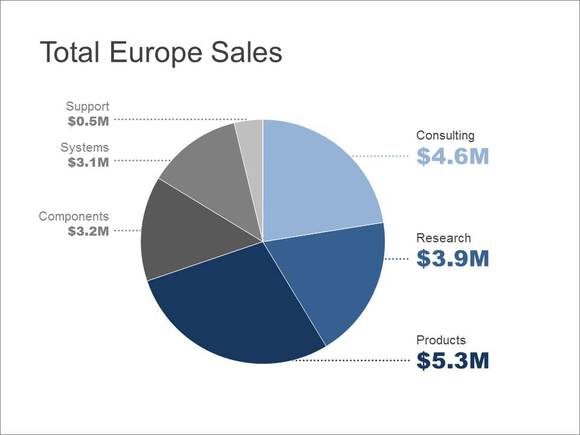 But pie charts can be tricky for an audience to process when segments are similar in size—it’s hard to distinguish between them at a glance. If you’re running into that problem, consider displaying the same data in a linear way. In this bar chart, for example, you draw attention to the poorest-performing unit, a point that got lost in the pie: 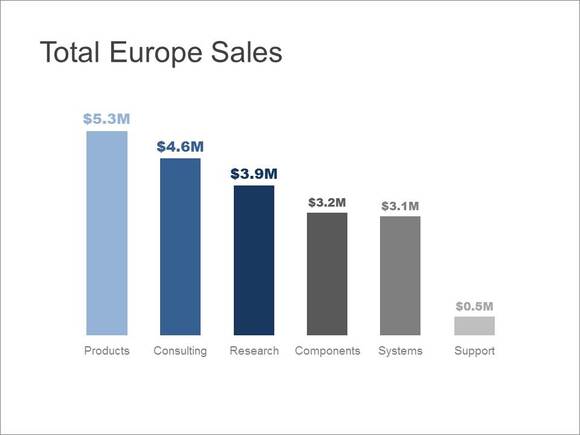 These few tricks will help audiences see what you want them to see when presenting data. By focusing their attention on the message behind the numbers, not on the numbers themselves, you can create presentations that resonate with them and compel them to act.