Skill up and save 15% this week only using code CYBERWEEK22 at checkout. Explore training
Home / Resources / Blog / The Secret Sauce of Successful Commencement Speakers 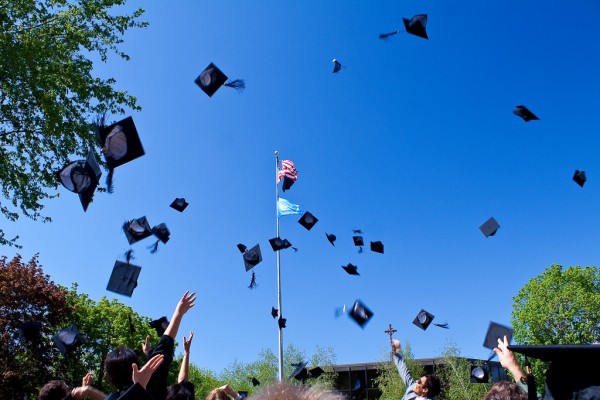 It’s that season again. Every time you open a page of news headlines, a social media feed, or a message from a family member or colleague, you stumble across yet another inspirational commencement speech. If you’re like me, you’ve seen enough of them that they’ve all started to blend together. Besides, who has the time to watch a 20-minute YouTube video? That’s practically enough time for a full-length sitcom episode, and I still haven’t caught up on Unbreakable Kimmy Schmidt.

But against all odds, and among a sea of choices, every year a few rise to the top, speakers so good, so unique, and so profound that you can’t help but find yourself listening to the whole thing. This year, more than a few political leaders, entertainers, and thought leaders made the rounds on the commencement circuit. A few were good; a few were not; and a few left an impression that will stay with me for a while.

For one, they were funny. Whether setting the tone for an entire speech or sprinkled in at key moments, humor plays a huge role in most successful commencement speeches. Matt Damon set this year’s standard for self-deprecating jokes in his commencement address at MIT, making fun of his second “fake graduation” from college and reading aloud a terrible review of Good Will Hunting.

Let’s just put that out there. I mean, I’ve seen the list of previous commencement speakers: Nobel Prize winners. The UN Secretary General. President of the World Bank. President of the United States. And who did you get? The guy who did the voice for a cartoon horse.

Damon wasn’t the only one who dared to make fun of himself. Even the President of the United States, Barack Obama, made fun of himself in his address at Howard University, saying, “I used to joke about being old. Now, I realize I’m old. It’s not a joke anymore.”
Both President Obama and Damon used humor strategically to build a rapport with their audience. Others used another tool: sharing their own stories of struggle and growth. Sheryl Sandberg made headlines when she publicly addressed her husband’s death for the first time in her commencement address at the University of California at Berkeley. In sharing her own experiences, she told the graduates what she had learned over the last year: “The easy days ahead of you will be easy. It is the hard days—the times that challenge you to your very core—that will determine who you are. You will be defined not just by what you achieve, but by how you survive.” Life advice like this comes standard in commencement speeches. What made Sandberg stand out was her willingness to open up about her own life—some of her deepest, darkest, saddest moments—to help the audience understand exactly what she was saying.

Other speakers went beyond general life advice. In a year focused heavily on politics, presidential elections, and social change, many speakers used their commencement speeches to call on graduates to change the world. Unsurprisingly, President Obama made the case for change in his addresses at Howard University and Rutgers University, encouraging the graduates at Howard to move beyond “righteous anger” towards organization and activism.

You have to go through life with more than just passion for change; you need a strategy. I’ll repeat that. I want you to have passion, but you have to have a strategy. Not just awareness, but action. Not just hashtags, but votes.

Similarly, First Lady Michelle Obama reminded the graduates of the City College of New York that “our greatness has always come from people who expect nothing and take nothing for granted—folks who work hard for what they have then reach back and help others after them.” But the calls for action didn’t just come from the Obamas. Director Spike Lee encouraged the graduates of Johns Hopkins to “wake up” to the injustices and inequalities of the world they live in. And between his jokes, Matt Damon encouraged the graduates of MIT to choose among the “world’s worst buffet” of problems and “go out and do really interesting things. Important things. Inventive things. Because this world … real or imagined … this world has some problems we need you to drop everything and solve.”

Using humor effectively, sharing personal stories, and calling for action all play important roles in successful graduation speeches. Like a great chef, each speaker uses those ingredients in different combinations to create something uniquely personal. But some add a little extra spice that makes their concoction stand out from the crowd. This year, two addresses did just that. Lin-Manuel Miranda gave a powerful speech at the University of Pennsylvania in which he reminded graduates that “the stories you are about to live are the ones you will be telling your children and grandchildren and therapists.” (But for anyone who saw it, the standout moment came when the university Provost freestyled his way through his introduction of Miranda.)

And in a season full of celebrity speakers, perhaps the most unique, powerful, and memorable of all speeches—and this writer’s all-time favorite—came courtesy of someone whose name you’ve never heard. Donovan Livingston, Ed.M. candidate at the Harvard Graduate School of Education, used his moment at the podium to share his gift of spoken word poetry with the world.

At the core, none of us were meant to be common. We were born to be comets, Darting across space and time —Leaving our mark as we crash into everything.

I didn’t even know I liked spoken-word poetry. But as I listened to Livingston speak, I felt the goosebumps rise and the tears come to the corners of my eyes. This is what speeches are for. This is what words can do. When put in the right hands, language can be a powerful tool to remind people of the best and the worst of what’s possible. Livingston gave that gift to the Harvard graduates that day, and—thanks to the Internet—to all of those lucky enough to hear him speak. He set a new standard for commencement addresses. I look forward to seeing which members of next year’s class rise to the challenge.