Skill up and save 15% this week only using code CYBERWEEK22 at checkout. Explore training
Home / Resources / Blog / Take Your Meetings by Storm…Gamestorm, That Is

Take Your Meetings by Storm…Gamestorm, That Is

The forecast for Friday, July 22nd at Duarte called for heavy downpours of creativity with intermittent showers of inspiration accompanied by flurries of sticky notes, pens and paper.  The deluge of out-of-the-box thinking began mid-morning and continued throughout the day as  Dave Gray and Sunni Brown hosted their day-long Gamestorming workshop, designed to equip individuals with tools to change boring, unproductive meetings into engaging, productive (and even fun) game-like encounters.

The class gave me the perfect opportunity to do some visual note-taking. Below are a few pages of my notes. Scroll down to the bottom of the post to see the rest.

Sunni and Dave began the day by building trust and commeriaderie within the group through a series of games.  One such game—World Café—literally brought attendees closer together as they answered questions about themselves within a series of concentric squares, starting with general questions in the outermost band and ending with more personal questions in the innermost square. 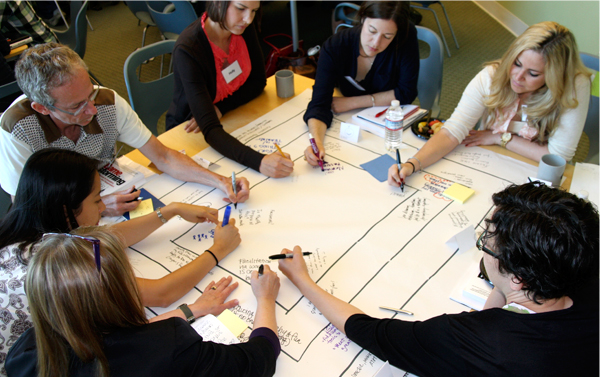 To get everyone on the same page about the pitfalls of poorly designed meetings, Sunni and Dave had attendees role play a typical meeting and assigned some roles (nay-sayers, “yes” people, problem solvers and meeting disrupters) for added realism.  Who knew that a meeting to come up with a new name for adult diapers could get so heated? 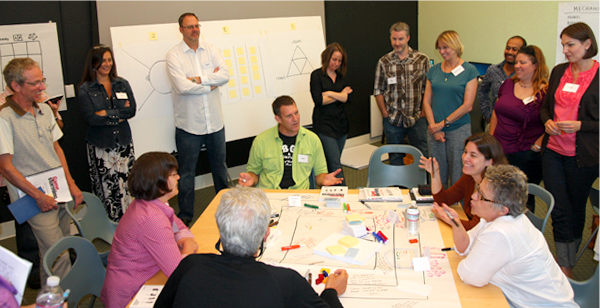 For the meat of the day, Dave had participants brainstorm all of the different meetings that they attend and then had them cluster those into categories on the wall.  Four distinct groups emerged—status meetings, client meetings, critiques and creative/ideation meetings.  These served as the fodder for the meeting re-design activities throughout the day, as teams adopted each of these meetings to reimagine.

Dave then had groups ask a series of firestarter “what if…” questions to help them envision each of these meetings in a new way.  Questions like, “If you could wave your magic wand, what would happen?” helped people break through previous assumptions about meetings in order to come up with new ways of designing them. 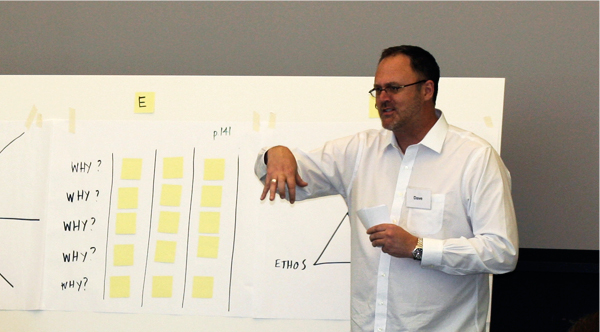 From there, Dave and Sunni led the group in some sketching exercises (Graphic Jam!) so they could visually communicate their ideas to others.  Teams developed vision drawings of their reimagined meetings and shared them with each other. 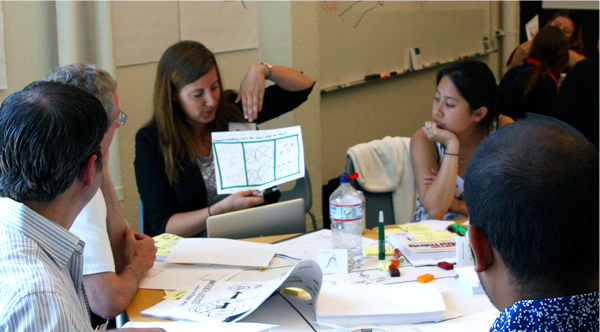 Sunni went through the anatomy of a game and Dave had the group brainstorm game mechanics—points, territory, surprise, challenge, race, taking turns—so that teams could bring elements of their favorite games into their meetings and thus make them more enjoyable and engaging. 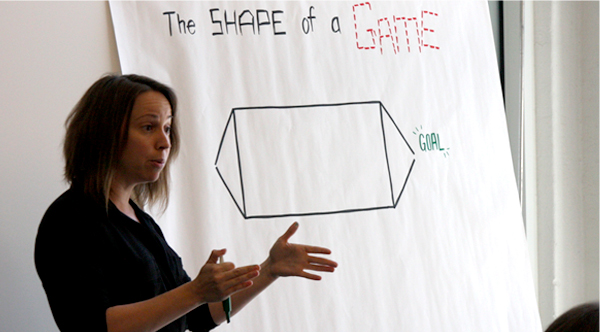 Teams worked together to develop a pitch for their new type of meeting and presented them to the group. It was amazing to see the ideas that were generated—a status meeting run as if it were an ESPN sports show, a critique meeting where attendees punched train-like tickets to establish evaluation criteria, a client meeting that involved card laddering and secret voting, and a creative/ideation meeting that started with 20 questions and ended with attendees presenting their ideas to a “shark tank.”  Amazing.  Now those are meetings I would like to attend. 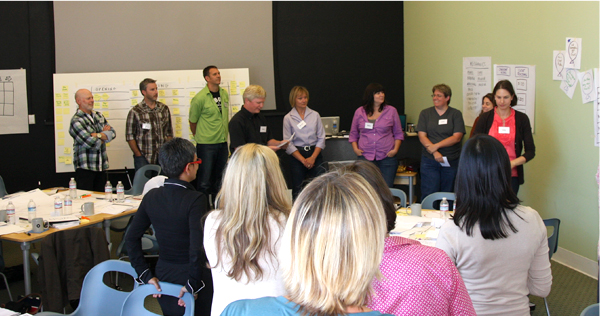 To wrap it all up, Dave and Sunni asked each participant what they would take back with them to their offices and gave attendees a look behind the curtain to see how they had used the principles of Gamestorming to design the day’s workshop, which in hindsight felt much more like an enjoyable day playing games (where we happened to learn a ton of valuable skills) rather than some day-long information dump.  I guess it works!

“A meeting is a game,” said Dave Gray, “there’s no reason it can’t be fun.” Imagine if more of our meetings incorporated principles of games in them.  I think they would inspire a lot less aggrevation, agitation, and apathy and instead evoke anticipation, action and appreciation.

Below are Eric’s visual notes from the workshop.