A couple of weeks ago, I attended the Watermark Conference for Women in San Jose. About 6,500 attendees, 95% of them women by my estimate, gathered for talks on diversity, inclusion, women’s issues, careers, and trailblazing/innovating/disrupting/leading change.

I left the conference energized and inspired. It also struck me that many of the things that moved me the most were about the two things that attracted me most to my gig at Duarte—the power of storytelling to create connection and meaning among people, and the importance of empathy in communications and relationships.

Here are three of the highlights that reflected those two ideas most; they contain valuable lessons for leaders and communicators who are students of story and empathy.

1. Viola Davis Weaving Storytelling and Empathy into a Life’s Work

Wow.  Actress Viola Davis blew the room away in her main stage keynote on the topic of “owning your story.” She described her journey from an 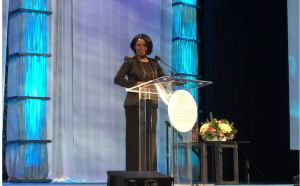 early childhood spent in abject poverty to her famed life today. Whether intentionally or instinctively, Davis used the same tools as history’s most talented orators to keep the audience rapt. She modulated the story between the current state and a better possible future state, and she used plenty of emotional content that the audience could relate to.

In Resonate, a book about the art of transformative visual stories, Nancy Duarte introduces the “Sparkline” as a framework for analyzing a presentation. The line moves up and down between “what is” and “what could be,” and changes colors to signify contrast in emotion and delivery.  If we analyzed Viola’s talk as a Sparkline, it would be a sterling example of a compelling speech, adhering to the same structure as famous addresses by heroes like Martin Luther King Jr. and Steve Jobs.

Davis’s big idea was that owning your story, even if, or perhaps especially if, your story is hard to own, leads to achievement, confidence, and happiness. Some moments I especially loved were:

I don’t care what other goal you have in life. Nothing, none of it, will do you any good if you do not own your story… Owning it. The good, and the bad.

Davis told the audience about a recent interview with an incredulous reporter who couldn’t understand how Davis was able to realistically portray her character, Rose Maxson, in the movie Fences. Rose’s husband had created a complicated quandary, having cheated on her, impregnated his mistress, and then asked his wife to raise the child. Spoiler alert: Davis’s character Rose says yes. And that’s exactly what the reporter couldn’t grasp.

Davis re-enacted the conversation with the interviewer, saying the reporter told her, “I could never do [what your character did]! I’m so….. put together.” Davis said she tried to explain to the reporter that sometimes people face “Sophie’s Choices,” choices that force a person to dig deep and choose to do something hard. The reporter never came around and instead remained adamant that she’d never do such a thing. And that’s when Davis hit us with the moral of the story: “If that reporter had owned her story,” explained Davis, “if she had said something more like ‘I don’t think I could ever do that, but you know? There are some things I have done, some things that I’m maybe not so proud of,’ well, in that ten minutes of that interview, we would have made a connection. Even if just for those ten minutes, we would have had a connection.”

The power in one’s story is it connects us to people, and it relinquishes fear.  Shame cannot exist when you share your story with people who have empathy.

Davis compared the classic “hero’s journey” to her own struggle trying to escape from a childhood where she was chased with bricks after school by boys who taunted her with racial slurs. She said she ran from them, ran home to a rat-infested apartment where her father’s violence was a constant threat. “Poverty is not just a financial state.  It gets in your mind. It destroys psyches. It destroys families.”

Like the classic hero, as early as age 9, Davis knew she had potential, but, like the hero, she needed a mentor to help draw it out of her. For Davis, the motivation came in the form of a one-two punch; the first from an older sister who prodded, asking what Davis what she would do with her life. The second was the idea she got when she watched Cicily Tyson in The Autobiography of Miss Jane Pitman on TV. It was then Davis decided she’d be an actress, “At some point, the hero finds that sweet elixir, the answer, the answer to the point of their lives. And then they slay dragons. My mamma gave me a crochet needle, and I started to face down those boys with it. Slaying the dragons, with a crochet needle.”

2. Albright and Rice Finding Human Connection Across the Aisle With a Shared Story 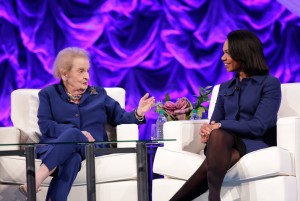 Madeleine Albright and Condoleezza Rice, the first female U.S. Secretary of State and the first African-American female Secretary of State respectively, pulled no punches discussing U.S. political affairs in a conversation with Kara Swisher. Albright was on fire with crushing one-liners about how frustrated she is by the Trump administration (it’s fun to hear the well-coifed, 80-year-old, ever-composed, Albright drop the f-bomb). Rice was characteristically more tempered – she urged people to panic less and trust in checks and balances and the system to constrain the power of the president.

But while politics and the opinions of these two luminaries were on everyone’s mind, what moved the room most was when Albright and Rice stepped back to tell a shared story of a moment in their shared past. Albright began by explaining that her father (a refugee from Czechoslovakia) was a professor in Denver in the 1970s, and one of his star students was Condi Rice.  In fact, Rice added, it was Albright’s father who’d encouraged her to pursue her Ph.D. and go into diplomacy and politics after she decided to drop her music major, and they remained mentor and mentee after that.  Albright took back the mic and said that later, on the Dukakis campaign, she tried to recruit Condi to help provide foreign policy advice. Rice butted in. “I said, there’s just one problem, Madeleine. I’m a Republican!” Albright put her hand on Rice’s and said, “and I said, ‘how could you be?!?! We had the same father!’” We all felt like friends in the room at that point. It was a touching moment. And then Albright got straight back to politics with a quick shot: “Just realize, a refugee immigrant trained two U.S. Secretaries of State.”

3. Elizabeth Gore on the Empathy and Technology Partnership

The breakout panel sessions had titles like “Forging New Pathways…. Insights for making the seemingly possible a reality” and “Trailblazers, Pushing the Envelope and Leading Change.” In the two sessions I attended, each (fabulous, accomplished) speaker on the panel shared something about how they got where they were, and then fielded questions on what made them successful.

I  asked Elizabeth Gore’s panel about how empathy and communication have contributed to their success in moving people. All the panelists had an answer, but Gore’s was particularly insightful. She said,“Technology does not take away empathy. Dell acquired a company this year called Pivotal…. They have 3,000 employees, and most of them are engineers and coders, probably the most deeply technical folks, who a lot of people would have blanketed as, they can’t communicate, they’re just too smart. The CEO of Pivotal actually does an “empathy test” for every hire at Pivotal. He says, it’s because the code is ultimately about the end user, who is a human. And so, he believes they have surpassed other companies like them because of this empathy test, because these folks can communicate.”

Stories are everywhere, no matter who you are or where you’ve been. And they’re powerful at forging connections and moving hearts and minds.  It was more than just a professional delight to see stories being used so powerfully at the Watermark Conference this year. The stories connected me to my fellow attendees in meaningful ways. They moved me. Which, when you think about it, is exactly what events like this are all about. 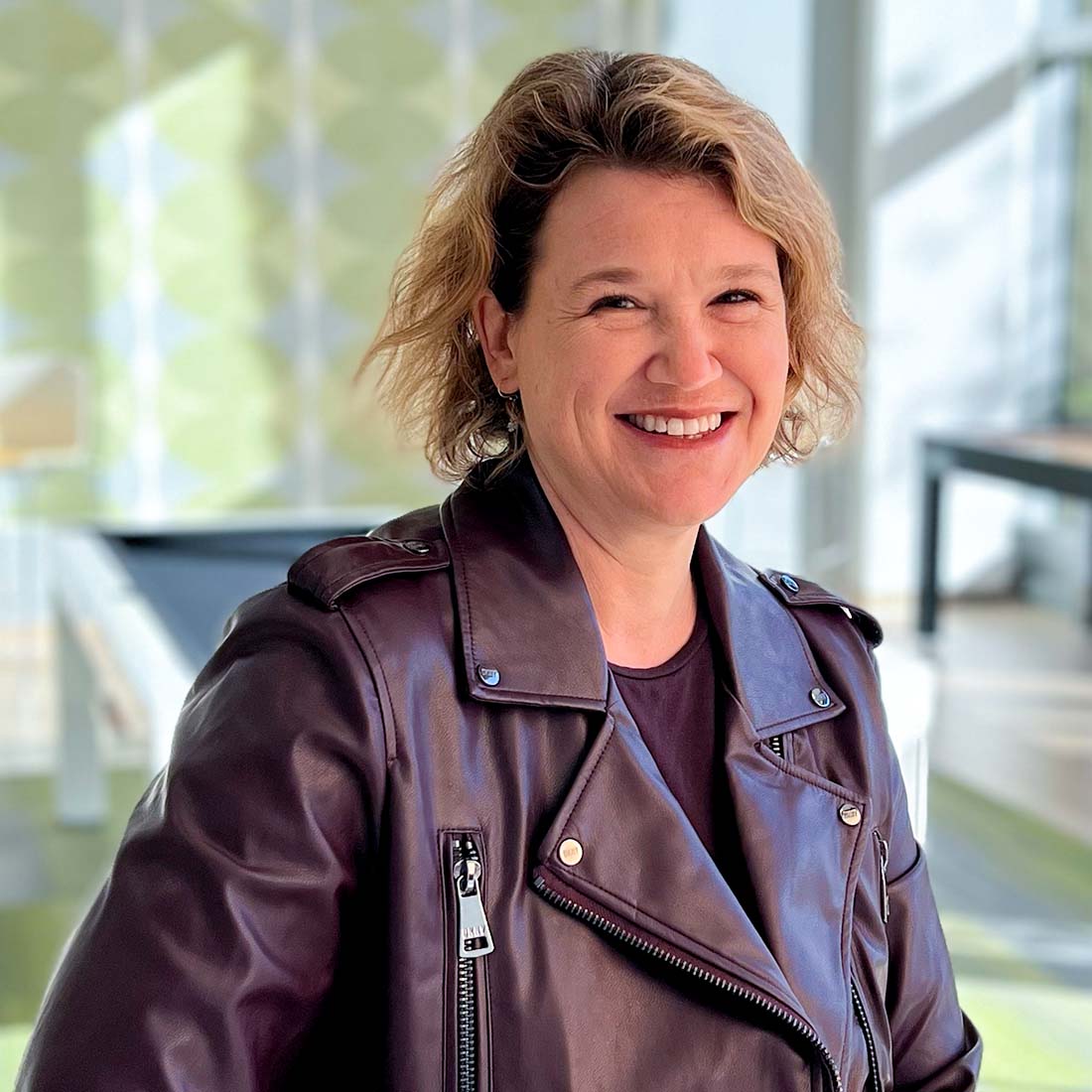