Skill up and save 15% this week only using code CYBERWEEK22 at checkout. Explore training
Home / Resources / Blog / Seeing the Invisible

I rarely treat myself to fiction due to the pile of business books looming on my desk. But this summer I read People Magazine’s must-read fiction book of the summer called The Shack.

Here’s an excerpt where the main character, Mack, is struggling to understand the concept:

Mack was listening but still watching the display before them. Sarayu continued, “Perhaps the best way you can understand is for me to give you a quick illustration. Suppose, Mack, that you are hanging out with a friend at your local coffee shop. You are focused on your companion and if you had eyes to see, the two of you would be enveloped in an array of colors and light, which mark not only your uniqueness as individuals but also the uniqueness of the relationship you have and the emotions you’d be experiencing in that moment.”

“But suppose,” Sarayu went on, “that another person whom you love enters the coffee shop, and although you are wrapped in the conversation with your first friend, you notice this other’s entry. Again, if you had eyes to see the greater reality, here is what you would witness: As you continued your current conversation, a unique combination of color and light would leave you and wrap itself around the one who just entered, representing you in another form of loving and greeting that one. And one more thing, Mack, it is not only visual but sensual as well; you can feel, smell and even taste that uniqueness.”

As a fluke, just as I was reading this part of the book (called “A Festival of Friends”), one of my employees, Steve, circulated a cool link that showed what gravity might look like if you could see it.

A group of folks at the space sciences lab at Berkeley had developed a very scientific-looking (fake) video about gravity that simulated light that sparked, arched and popped. 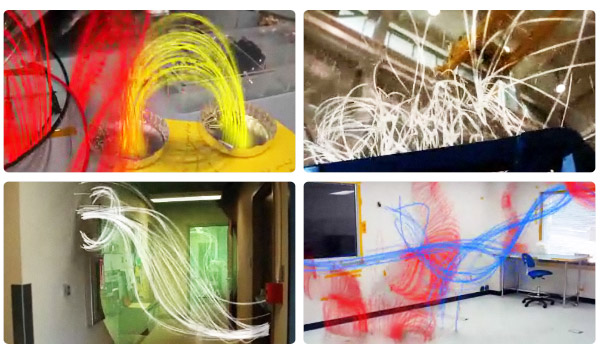 The gravity looked like it was struggling but also like it was attracting and longing. Similar to what our own souls feel at times. I thought the video was real (doh) and even asked my scientific daughter how it worked. She had to tell me it was fake. When I saw this clip, it helped me visualize the scene from the book.

Making the invisible visible is what many of us have to do every day in our presentation applications to help people “see” our strategy, plan, software or numerous other invisible concepts. It’s rare though to show in a tangible way what an emotion might look like.

If you could see another’s soul and their affection for you, I could imagine that it looks like sparks of light or even orbs of light that long and reach out for another and wrap around their soul pulling your heart towards them.