During a recent vacation to visit family in Pennsylvania, my husband and I made a side-trip to New York City to see the Jim Henson Company’s production of Stuffed and Unstrung. (Think: live improv comedy + Henson puppets + adults only) The show was hilarious, and I definitely recommend it, but one aspect of the show particularly caught my eye…

During intermission and after the show, they used a website called Visible Tweets to display tweets on the two large screens that occupied most of the stage. Okay, not the first time I’ve heard of someone displaying a Twitter feed during an event. But Visible Tweets is the best execution I’ve seen yet. 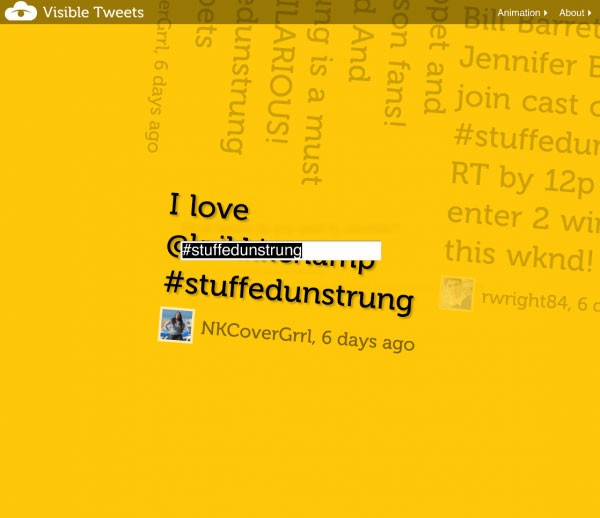 The audience was given a hashtag to add to their tweets, and during intermission many people remained in their seats, waiting for their tweet to show up on the big screen. It was engaging and fun, and even got audience members talking more among themselves. (You might even see a couple of tweets from me up there!)

The biggest benefit, of course, is the free buzz generated by the audience. Not only were those tweets being read by those in the theater, but also by anyone in the world with access to Twitter.

Twitter has become the hottest new social media tool, and I’m excited to see how people start using it more in presentations. How have you used it so far? Sound off in the comments.