In the early 1400s, Florence, Italy was a hotbed of artistic competition. There were cathedrals to be built, giant baptistery doors to be sculpted, and lots of artists wanting to get in on the action.  Up-and-coming sculptor and architect, Filippo Brunelleschi, was one of those artists.  He had spent much of his life studying ancient Roman architecture and had entered his share of design competitions only to come in second to his more showy, but less qualified, peers. 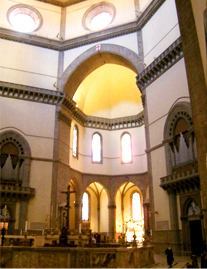 As a resident of Florence, Filippo lived in the shadow of the Santa Maria del Fiore Cathedral, the largest cathedral in the world at that time.  Construction on the cathedral had begun in 1296, but after its original architect was unable to come up with a way to construct a dome over the cathedral’s massive nave, the building had remained unfinished for nearly a century.

In 1409, the group in charge of the construction of the cathedral asked Filppo’s opinion about how the dome (cupola) should be built.  He offered several ideas based on his studies of ancient Roman domes, but to his frustration, none of them were implemented. 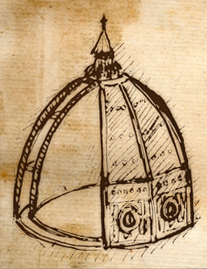 Nine years later in 1418, the group announced that they were accepting new ideas for how to design the dome.  While at first the competition was only open to local artists, the group eventually opened it up artists all across Europe.  Filippo submitted his name to be included and was eventually invited to participate.  He traveled to Rome to study ancient structures and worked out his design for the dome.

The day of the presentation arrived.  Master builders from all over Europe assembled in the unfinished cathedral.  Each architect presented his solution in turn.  Many ideas were presented.  One thought the dome should be made of “spongestone” to keep the weight down.  Another suggested that they put a giant pillar in the middle.  Yet a third proposed that the dome be filled with earth mixed with money during the construction, and then once it was finished, that citizens be allowed to dig for the money, removing all of the dirt in the process.

Filippo was last to present.  He was confident that he alone, based on his knowledge of ancient methods of dome creation and study of the Gothic techniques, had the answer.   He verbally described his solution: a dome within a dome, octagonal in shape, capped by a lantern to let in light, all of which would be constructed without scaffolding.  They were astonished by his claim and demanded to see his model.  Fearing that the other architects would steal his design, or that (even worse) his design might be given to someone else to build, Filippo flatly refused. 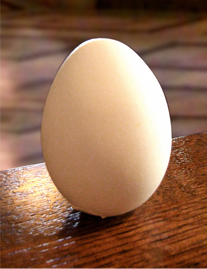 Filippo then issued a challenge, saying that the commission to build the dome should be given to the man who could make an egg stand on end, as that man would have the skills required for the job.  After the various architects tried in vain to accomplish it, Filippo took an egg, whacked it on its end and then placed it on the table where it stood upright and did not fall over.

The dome was completed in 16 years and is the largest dome ever created with bricks and masonry.  It has been credited as an inspiration for St. Peter’s dome, St. Paul’s Cathedral in London and even the Capitol Dome in Washington, D.C., and is a must-see destination for all those who visit Florence.

Do you operate in a competitive environment?  Have your great ideas not gotten the chance they deserve?  Do you need to stand out from the crowd in order to be heard?  Sometimes it takes a little extra effort to push a great idea through the cloud of politics and jealousy into the light for everyone to see.

You can do that with your presentation.  Take a cue from a 15th Century architect and be bold!  Consider using a S.T.A.R. Moment™.  Make yourself memorable.  Take a risk.  Your idea (and possibly the world) will thank you for it.

3 Steps to a Clear Message Strategy

I can’t help but chuckle remembering my early career as a magazine editor (in the late 1990s) when I... […] Continue reading

3 Lessons Learned From the Return to Hybrid Presenting

You can call it a comeback—we’ve been here already. Long before closets became home offices and kitchen tables doubled... […] Continue reading

Communication can be difficult when you’re in the same room. So what happens when you’re separated by screens and... […] Continue reading

Lessons From the Great Career Reshuffle: L&D Is More Important Than Ever

Call it the “great resignation” or the “great reshuffle,” 2021 marked a pivotal, and unprecedented, time in the American... […] Continue reading