Skill up and save 15% this week only using code CYBERWEEK22 at checkout. Explore training
Home / Resources / Blog / How to Spread Your Talk

How to Spread Your Talk

If you have an important idea to spread, you’ll probably want it to spread beyond only the folks sitting in the room. Using social media tools can help give you and your idea further reach. Since it takes hours to prepare for a big presentation, it makes sense to get as much visibility for it as possible. 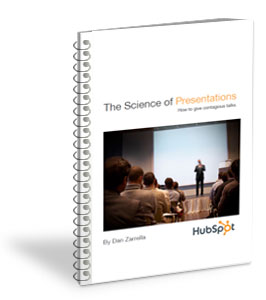 I got a sneak peek at a very interesting research study from Dan Zarrella (check out his book) over at HubSpot. He’ll be hosting a webinar about the findings from his paper The Science of Presentations. He analyzed extensive surveys and Twitter feeds to determine how social media tools can make an idea–in this case a presentation–contagious.

The audience surveyed was primarily social media folks so the first statistic was a bit of a surprise for me. Even though people spend a vast amount of time in presentations, thirty-five percent of respondents said they tweet about presentations never or less than once a year. Then, later the research showed that most presentations are tweeted for the audience to share information or novelty insights. In other words, people like to share things they’ve never heard before. So if you tie those two statistics together, it sounds like most presentations aren’t very informative or novel enough to tweet about. Let’s fix that!

There are tons of interesting insights from the study. And if you attend his webinar on Thursday August 19 at 1pm EDT and you’ll get a copy of his new e-book.

Here’s what I particularly enjoyed from the study:

Caring about Twitter is important. Reviewing your Twitter feed after a presentation is like being a fly on the wall near the water cooler after your talk. People share what they thought was insightful and repugnant. It’s a great feedback mechanism for you as a communicator and also for the quality (or novelty) of your idea.

The end of the e-book has some great points about simplicity that you should print out and post on your wall. Also, Austin Carr over at Fast Company interviewed Dan on insights from Dan’s study and feedback on how simplicity works for Steve Jobs. It’s a nice read.