10 Ways to Prepare for a TED-format Talk

These 18-minute talks are hard to do. It’s easier to blather on for an hour than talk for a tight 18 minutes knowing that if you go over, you (literally) will get the hook.

The talks I give usually take me a comfortable 45 minutes but I needed to get the insights out in 18 minutes. The culling process forces you to convey only the most important information for spreading your idea. The amount of rehearsal time is inversely proportionate to the length of the talk. The shorter the talk, the longer the rehearsal time. In this case, for an 18-minute talk, we took approximately 18 hours to rehearse. An hour a minute? That’s probably fair for someone who’s a professional presenter like me. A less seasoned speaker may need more!

I delivered one talk at TEDxEast and was thrilled to look up at the clock just as it was ticking down with :06 seconds left on the clock. Victory! Then, I delivered a similar talk at the INK conference in India but was restricted to 15 minutes. Even though I practiced like mad and timed it to a perfect 14 and a half minutes, I was medicated for a severe chest cold and my time somehow spread and I got the dreaded “hook” because I ran one minute over, but would have run two minutes over if I hadn’t had tip #10 in place.

Here are the ten steps I went through in rehearsing for my talks.

1. Print your current slide deck as 9-up handouts. The 9-up format is conveniently the same size as the smallest sticky note. I arranged and re-arranged my message and added sticky notes until I was happy with the flow. I also made sure I cut at least half the slides I use for my 40 minute talk. 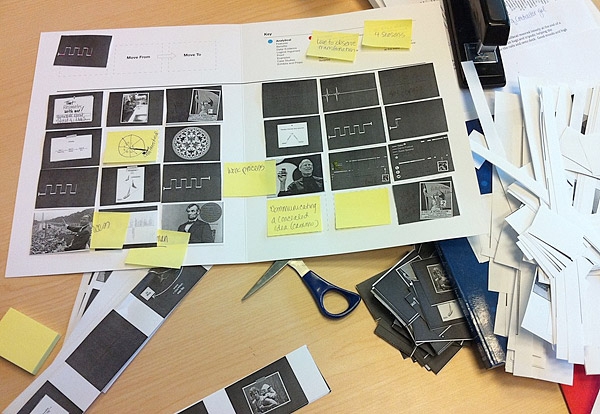 2. Solicit feedback. Assemble a handful of people you trust to give honest feedback on your mini little sticky note slide deck. Verbally run the ideas by these folks (doesn’t have to be a formal presentation.) The purpose for having them look at all the slides at once is you want feedback on the “whole”, not the parts. Have them give you feedback on the content you’ve chosen and whether they think it will resonate with the TED audience. I did this four times–twice each with my ExComm Manager and twice with my company President. After they added their insights, I was ready to have the slides digitally produced.

3. Rehearse with a great (honest) communicator. In my case, I rehearsed with my ExComm Manager. She is very good at rehearsing me and became a trusted coach. She would say “When you say it that way, it can be interpreted differently than you intended”, “When you use that term, you come across derogatory”, “I thought that when you said it last time it was better, you said…”. She worked hard tracking phrases and rounds of what was said. Honesty is the best policy. Make sure your coach is not afraid to speak up. 18 minutes goes by fast–you love your material and you want to include all of it–-but for a TED-format talk you need someone you trust to help you murder your darlings.

4. Close the loop. A lot of times, as the presenter, you know your material so well that you think you’re making each key point clear. You might not be. Your coach should make sure you are telling people why. It’s the “why” around our ideas that make them spread, not the “how”. Articulate the why so your audience understands what’s magnificent about your big idea.

5. Practice with clock counting up. The first few times, rehearse with the clock counting up. That’s because if you go over, you need to know how much you’re over. Do NOT be looking at the clock at this time. Have your coach look at it because you don’t want to remember any of the timestamps in your mind. Finish your entire talk and then have your coach tell you how much you need to trim. One minute, three minutes. Keep practicing until you’re consistently within 18 minutes. Your coach should be able to tell you to trim 30 seconds here or add 15 seconds there so that your content is weighted toward the most important information.

6. Practice with clock counting down. Once you’re within the timeframe, begin practicing with the clock counting down. You need to set a few places in your talk where you benchmark a time stamp. Calculate where you need to be in the content in six-minute increments. You should know roughly where you should be at 6, 12 and 18 minutes. You should know the slide you should be on and what you’re saying so that you will know immediately from the stage if you’re on time or running over.

7. Noteworthy. Your coach is there to jot down what you say well and what you don’t. They should work from a printout of the slides and write phrases you say well so they can be added to your script. They should help capture phrases so you can type them into your notes.

8. Don’t be camera shy. Videotape some of your final practices. It doesn’t have to be the best setup ever–we used our Flip camera on a tripod in the hotel–you just need to feel like something’s at stake. It helps you get used to looking at the camera, and you can review the video to look at your stage presence, eye contact, gestures plus identify any expressions that need modification. Also, if you do an especially good practice run, you can go back and listen to the audio and add the best snippets to your slide notes.

9. Do one more FULL timed rehearsal right before you walk on stage. This is where I blew it in India. I practiced fully several times that morning but didn’t feel it necessary to pull out a timer. I confess, I didn’t time it for a week, but rehearsed like mad. It would have been even better if I’d rehearsed via Skype with my coach. I would have averted a disaster.

10. Have two natural ending points. I wanted to accuse the India show operators of not really giving me a full 15 minutes on the clock. But I was the one who blew it. It might have been the meds I was on for my chest cold, but my timer was *blinking* before I was done. Fortunately, I’d embedded two natural places to end my talk. I had an ending that made the talk complete and I stopped there. What I didn’t have time to get to was the inspirational ending that would have had them on their feet and screaming (well, they did end up on their feet, they just weren’t screaming.)